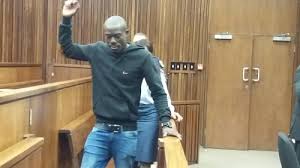 The High Court in Johannesburg has sentenced a man convicted of sexually exploiting a 15-year-old girl and forcing her into prostitution to an effective 20 years in prison.

Two weeks ago Eke Ogochukwu was found guilty of four charges relating to human trafficking. The teenager escaped in August 2015 and received help from a nearby church in Rosettenville. Judge Majake Mabesele says what the accused did was cruel.

“Clearly what happened to her was cruel, inhuman and degrading and was a violation of the right to human dignity, which is enshrined in our Constitution.” Ogochukwu, known to the girl only as Johnny, sexually abused her.

The court heard that he would drug her, force her to perform sexual acts with other men and take the money she made through prostitution. The young girl was given R50 a day for food and a further R100 for every man she was forced to sleep with.

The judge says Ogochukwu took advantage of the teenager as she was homeless after running away from her Vereeniging home in 2015 following a fight with her mother.