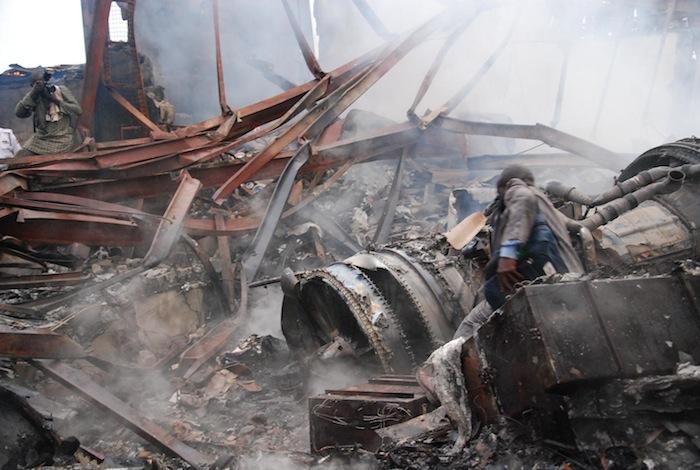 Dana Air has disclosed that the airline would review all the safety recommendations prescribed in the full report of the Accident Investigation Bureau (AIB) that was made public on Monday.

Mr Kingsley Ezenwa, the airline’s Communications Manager, stated this in a statement issued to newsmen in Lagos on Monday.

The AIB Commissioner, Mr Akin Olateru, on Monday, presented the final reports on the Dana crash and three other serious incidents.

The Boeing MD-83 aircraft with registration number 5N-RAM which was going to Lagos from Abuja crashed in the densely-populated Iju-Ishaga area of Lagos State.

The plane crashed into a two-storey building at Iju-Ishaga, killing all 153 passengers on board, including six crew. There were also six confirmed ground fatalities.

Ezenwa confirmed in the statement that the airline had acknowledged the full report of the bureau.

“The airline will continue to review the safety recommendations contained in the previous interim and this final reports that have been made public by the Accident Investigation Bureau.

“We are glad that the report confirmed that the aircraft was airworthy at the time of departure, the flight crew were certified and that we have cleared all defects during their last check,” he said.

Ezenwa noted that the airline had swung into action immediately the Interim Safety Recommendations of the airline’s ill-fated crash were released in 2013.

“We wish to also state that Dana Air swung into action immediately the Interim Safety Recommendations were released in 2013.

“And as an airline which is strictly committed to the safety and comfort of its passengers, we have implemented all the recommendations same year, as released by AIB.

“We did not stop at just implementing the recommendations; we also successfully passed an operational audit conducted by the Nigerian Civil Aviation Authority (NCAA)’s Flight Safety Group and its foreign partners.

“In 2016, after another rigorous operational audit, Dana Air was admitted into the IOSA register to underscore its strict adherence to global management and safety standards and procedures required of global carriers.

“Also went further to win two awards from two reputable organisations for the redefining role it played in the aviation industry same year,” he said.

Ezenwa explained that the airline had maintained a rich spare parts store to date, adding that it had doubled its maintenance and safety efforts with constant training and retraining of our crew and ground staff.

“This has led to our continuous provision of reliable air transport operation and a record 4.5 million passengers flown in the last eight years of our operation.

Ezenwa said the airline reassured passengers of its total commitment to their safety and comfort onboard flights.

“The safety and comfort of our guests remains a top priority for us and may the beautiful souls of the crew and guests we lost in the unfortunate accident continue to rest in peace- Amen.

“They remain forever in our hearts and our prayers and thoughts will continue to be with their friends and loved ones,” he added.