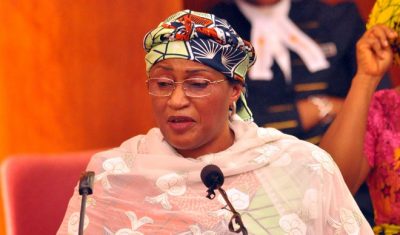 The Minister of Women Affairs and Social Development, Senator Aisha Alhassan said that the country is committed to ensuring gender equal opportunity between men and women, so as to protect the rights of women and girls.

Alhassan said this at the 61st session of the Commission on the Status of Women (CSW) on Monday in New York.

She said that the Gender and Equal Opportunity Bill had passed through the second reading at the Senate and would soon become law.

“At the national level, Nigeria has scaled up its legislation on gender equality.

“This is by pushing for the enactment of the “Gender and Equal Opportunities bill” the process of which has already passed through the second reading at our national parliament.

“The bill, when finally passed into law, would enable women whose rights to decent work are infringed on to seek legal redress and be adequately remedied,” she said.

“In our determination to put the issues of women on the top agenda and demonstrate commitment to the Beijing Declaration, several women are currently occupying top political and managerial positions in the country.

“Notable of which is their visible presence in the Federal Cabinet and across the 36 states of the federation,” the minister said.

She noted that “the provision of Crèches nationwide by both public and private sector institutions is in line with the global campaign to provide a conducive environment for working women.

“Cardinal among government’s social investment programmes is the housing loan scheme with the aim of affording opportunities for men and women to obtain housing loan at a single digit interest rate.”

She said the overall aim is to ensure that over 5,000 civil servants benefit in the first phase. The scheme is delivered through two pathways.

“First is the Federal Integrated Housing Programme in which government has invested 41.27 million dollars for civil servants as an incentive for them to own their own homes.

“Second is the Family Housing Fund established with a total sum of 127 million dollars to provide affordable housing and enable people outside the Civil Service to benefit from the government policy.”

Alhassan also enumerated several ongoing programmes on poverty eradication, which targeted many women in the country like the N-POWER, to combat employment, restiveness and poverty among the youth.

“N-POWER targets the enrollment of 500,000 unemployed graduates as teachers and Agric. Extension Workers and 100,000 non-graduates as artisans.

“It is instructive to state that women who are mostly the caregivers of households, constitute the significant number of beneficiaries of this scheme.”

“It is part of the government’s poverty eradication initiatives aimed to collectively support states to feed 24 million school children, representing the largest feeding programme of its kind in Africa.”

Under the Government Enterprises and Empowerment Programme, she said a total of 164 million dollars was earmarked for annual disbursement with a percentage of the sum set aside exclusively for women empowerment.

The sum set aside for women under the GEEP programme is called the National Women Empowerment Fund, she said.

“On a happy note also, I want to formally inform this gathering that the 24 of the abducted Chibok school girls, who were recently rescued are currently undergoing a rehabilitation and re-integration programme in a secured facility.

She said the Federal Government is not resting on its efforts to secure the release of the remaining abducted Chibok school girls.

Alhassan expressed the gratitude of the Federal Government and Nigerians to the UN Secretary-General, Antonio Guterres, for appointing Ms Amina Mohammed, as his Deputy.