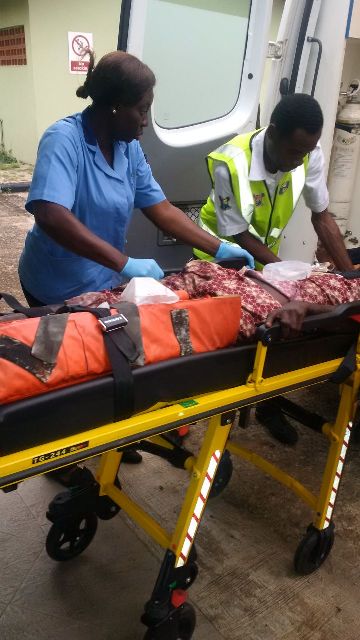 An Accident victim being attended to

Four persons have so far been confirmed killed in an auto accident that occurred Wednesday night on the Benin-Asaba dual carriage way in Edo state.

The accident occurred between Ugoneki and Evbuobanosa, near Abudu, the administrative headquarters of Orhiomwon local government area of the state.

Our correspondent gathered that the ill-fated bus which had the inscription of NNTCL 670 at its back, was heading from Onitsha to Benin.

Unconfirmed report had it that all the passengers in the ill-fated bus died at the spot due to the huge impact of the collision with the truck.

As at the time of filing this report, it was not clear what caused the fatal accident, but operatives of the Abudu unit of the Federal Road Safety Commission (FRSC) who were alerted by villagers were said to have quickly mobilized to the scene of the accident for rescue operation.

When contacted late Wednesday night, the State Sector Commander of the FRSC, Mr. Samuel Odukoya, confirmed the incident, adding that the Abudu unit team of the Command had been deployed to the area for rescue operation.

Odukoya confirmed that four of the victims who were rushed to a nearby hospital died.

He assured that further details of the actual number of persons involved in the accident would be made known after the personnel of the unit command must have evacuated all those involved.