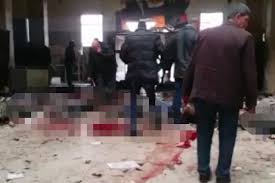 Suicide bombers struck a courthouse and a restaurant Wednesday in the Syrian capital of Damascus, killing more than two dozen people and injuring others, Syrian state news said.

At least 25 people were killed at the Palace of Justice, the main courthouse in the city center, Syrian state TV reported, citing police.

A number of people were wounded in the attack, which occurred during busy work hours. The Syrian prosecutor general said the strike was timed to inflict many casualties

Police tried to prevent the attacker from entering, but he was able to force his way in and blow himself up.

A few miles away in the al-Rabwa neighborhood, a bomber wearing a suicide vest blew himself up inside a restaurant, killing and wounding a number of people, the state-run Syrian Arab News Agency reported. The precise breakdown of casualties has not been released.

State TV said that security forces were chasing the “terrorist” when he went inside the restaurant.
There were no claims of responsibility for the attacks.

Since the Syrian conflict began in 2011, an estimated 400,000 Syrians have been killed in what the United Nations is calling the worst humanitarian crisis since World War II.