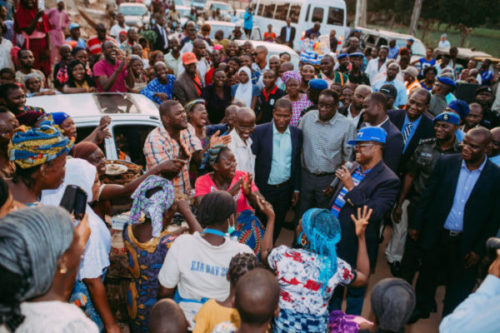 Governor Abiola Ajimobi of Oyo State has told contractors handling the multi-billion naira road projects within Ibadan metropolis and residents of the affected areas that he did not intend to hand over uncompleted road projects to whoever will succeed him in 2019.

The governor disclosed this while addressing residents of Agodi-Gate, Idi Ape, Iwo Road Interchange, Basorun, Akobo-Oju Irin and Ologuneru, during an inspection tour of the project sites, in company with the Deputy Governor, Mr. Moses Adeyemo, and other top officials of the state.

He said that he would spare no efforts in ensuring that the ongoing expansion and dualisation of roads in these areas were completed in the next eighteen months by personally supervising the projects until they were completed.

Although some of them were federal roads, Ajimobi said that the state government decided to bankroll the projects to give succor to residents, whom he said were daily experiencing hardship while plying the roads.

At each stop, enthusiastic residents, who trooped out in their numbers, had pleaded with the governor to ensure that the projects were completed in record time.

Assuring the people that the projects would not be delayed, the governor appealed to them to endure the attendant inconveniences that the project was bound to cause by cooperating with the contractors.

Ajimobi said, “For ease of business and commercial activities, we must build roads. You will recall that this government is the first that was elected for a second term by the people in the history of Oyo State. We are still grateful for this. This is part of the dividends of democracy. We made promises to you during the election and this project is in partial fulfillment of the promises. We will not renege on any of our promises. What we promised, we will deliver and it will be solid projects that will endure. We are going to complete the road construction projects within the next eighteen months, because I don’t intend to hand over these road projects uncompleted to my successor. We are desirous of leaving behind a legacy of achievements in urban renewal”.

He continued, “We owe the citizens the responsibility of modernizing and beautifying Oyo State like other big cities in the country. But, I must appeal to residents to endure the imminent inconveniences because to eat omelette we must break eggs. With good road network and infrastructure, we already have platform for development and no administration has ever worked the way we are working. It will boost commercial activities and also serve as incentives for investors”.

A resident of Akobo Oju-Irin, Mr. Siyanbola Gbenga, told newsmen that the people of the area were in dire need of expansion of the road which according to him would ease the perennial traffic congestion that had become a nightmare for them.

At Iwo Road interchange, the governor bought roasted plantains on display by a roadside seller, Mrs. Rachel Oyerinola, who was dumbfounded at her luck at being paid a sum far higher than the selling price of the plantains.

The woman said she was amazed at the rapid transformation that Iwo Road had undergone during the Ajimobi-led administration.

Having inherited the business from her mother, whom she said also sold the commodity on the same spot, she said she had always known Iwo Road as the den of armed robbers, thugs, hard drug peddlers and rapists until Ajimobi instilled sanity in the area.