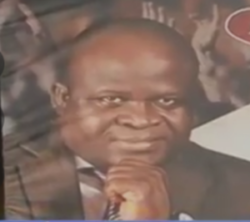 The founder and head pastor of Love Fire Ministry, a Benin-based pentecostal church, Pastor Godwin Emmanuel, has been assassinated by gunmen.

The deceased who was also known as Prophet Speed, was shot dead on Sunday night along Oko Central road, off Airport road, Benin, Edo state.

The late cleric was said to have founded the church about 11 months ago.

Head of media of the church, Festus Edema, who narrated the incident to journalists, said the pastor was on his way to distribute food items to members of the church who are in need and to drop one of his members at Oko Central road, when he was shot dead by yet to be identified gunmen.

Edema explained that the assassins pretended to be pushing their car that broke down.

“The man of God stopped for them to pass so that he can have his way. He never knew that they were the people who came to attack him. So they shot him in the chest and stomach.

“Being a strong man, he still tried to put the car in reverse and as he was reversing the car, he hit the fence and they came and shot him at close range. That shot silenced him,” Edema explained.

Also speaking, a member of the church who identified himself simply as Pastor Esquire, said the news of the death of the cleric devastated him.

“When I heard about the news of his death, it was devastating and shocking. It is a painful one, very painful, but God will give us the strength to go through it,” Esquire said.

When journalists visited the premises of the church, situated at 3, Ugiagbe street, off Country Home Motel Road, in Benin, members of the church were seen discussing the incident in clusters.

The state police commissioner, Mr. Haliru Gwandu, who lamented the increase in cases of assassination in the state, said men of his command are not relenting in their desire to rid the state of criminals.

He assured that those involved in the killings would be brought to justice.

“My command is ever ready to deal decisively with night marauders,” Gwandu said.

In a related development, gunmen suspected to be hired assassins have shot and killed a middle-aged woman, Mrs. Pat Oyo Omo-Osagie.

She allegedly met her death Sunday night at the hands of her assailants who trailed her to her residence, located along Adesuwa road, GRA, in Benin.

Until her death, the deceased operated a provision/snacks store along Agenmomen road, a stone-throw from the state police headquarters.

When journalists visited the scene of the incident, evidence of the assassination was visible as blood stain and the shattered window glass of the deceased’s car littered the ground.

Some family members and neighbours who described the incident as shocking and unfortunate, said the deceased was just returning from her shop when the gunmen shot her at the entrance of her residence.

One of the sympathisers, Mrs. Mata Ojeikere, described the late Mrs. Omo-Osagie, as a woman with heart of gold.

“From the look of things, it’s like they were at the gate waiting for her. They didn’t take anything from her car. She has a heart of gold. Her heart is like glass, you can see through her. She’s such a nice person,” Ojeikere said.

Anthony Ohiovbeunu, a family friend of the deceased, said “those who killed her have not done anything. If they think they have done something, we leave them to God.”

The state commissioner of police, Mr. Haliru Gwandu, who confirmed the incident, disclosed that two persons have been arrested in connection with the incident.

Gwandu said the police would investigate the two men to know their level of involvement in the killing of Mrs. Omo-Osagie.