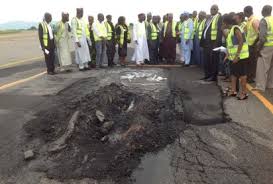 The News Agency of Nigeria (NAN) correspondent, who visited the airport reports that both workers and equipment have been fully deployed on the runway with major work underway.

NAN also observed that a substantial part of the runway has been excavated, showing that work has been on for a number of days already.

He explained that the runway, which had a total length of 3.6 kilometers had been divided into three parts by Julius Berger with the plan to complete each of the one third in two weeks each.

According to him, the mailing (digging) of the first 1,200 metres has been done within one week, later on the asphalts will be laid and then the electric light fitting will be fixed.

“The length of the runway is 3.6 kilometres but so far, we have mailed one third of it, which is 1,200 metres and they are going to finish the mailing of this part today.

“We will work on that one third, mail it, put asphalt and the electrical fittings then move on to the second and third part.

“They have done the scan part of the mailing and the contractor said they are going to finish it as scheduled,” he said.

Mustapha also disclosed that the major work would be carried out on the middle portion of the runway which is 20 metres of the total 45 meters width of the runway.

He explained that the middle portion would be mailed (cut) by an average 17 centimeters deeper underground to address the defects.

According to him, the depth of the middle portion to be removed is 17 centimetre because the landing is always in the middle, that’s where the aircraft lands.

“That is why we feel that the middle has more structural problem and that is why we are cutting deeper to solve that problem before we put the asphalt.

“The runway was opened in 1982 and no major work has been done on it in almost 35 years after, this is the first major work that is being done on it sine construction.

“It was designed for 20 years and it has been used for additional 15 years so we expect this type of problem,’’ he said.

The Minister of State, Aviation, Sen. Hadi Sirika had on many occasions stated that Abuja airport runway had totally failed due to negligence on the part of the past governments.

This informed the decision of the government to shut the airport for comprehensive repair of the runway and subsequently diverted all Abuja flight to Kaduna airport for six weeks.