5,000 rescued from Boko Haram in Cameroon 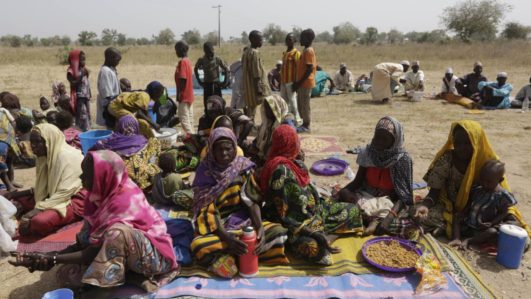 Some of those rescued from Boko Haram

West African forces freed 5,000 people being held in villages by Boko Haram, in an operation that killed more than 60 fighters and destroyed the Islamist group’s hideout along the Nigeria-Cameroon border, Cameroon said on Wednesday.

He later clarified that “the 5,000 people were saved after a sweep at the border within Cameroonian territory … who were hostages that could not leave the villages,” adding that “more than 60 terrorists were … neutralised.”

In addition, 21 Boko Haram suspects had been arrested in the raid in the Mandara Mountains between Feb. 26 and March 7, which destroyed a fuel depot and recovered weapons, motorcycles, around 50 bicycles, flags and “various propaganda objects”.

Reuters reports that Nigerian Islamist group Boko Haram has been fighting since 2009 to try to establish an Islamic caliphate in the Lake Chad region, where Nigeria, Cameroon, Niger and Chad join.

A coordinated push by the militaries of the four nations has dismantled much of the territory Boko Haram once held, but the group remains capable of launching lethal attacks, often targeting the civilian population.

In 2014 Boko Haram gunmen abducted 276 schoolgirls from the Nigerian village of Chibok, to worldwide horror, and some 200 of them are thought to still be in captivity.

The Lake Chad region has witnessed an increase in attacks bearing the hallmarks of Boko Haram in markets and refugee camps since late 2016, and the United Nations says more than seven million people risk starvation owing to insecurity there.

As its fighters have been increasingly been killed or locked up, the militants have sometimes resorted to using female captives as suicide bombers.

Four female teenage suicide bombers killed two people and injured 16 others on Wednesday in the northeast Nigerian city of Maiduguri, where the uprising first began.

Bakary said no Cameroonian soldiers had been killed in the raid, although one had been wounded.