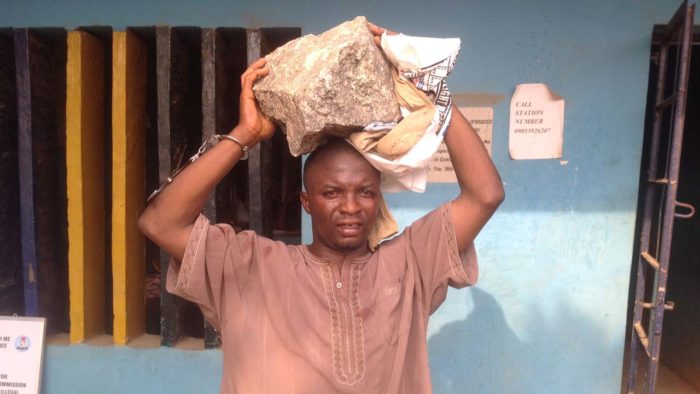 Shock, followed by pandemonium and palpable fear, enveloped residents of White Sand area of Isheri-Oshun in Ejigbo area of Lagos State, following the murder of a three-year-old child, Chiagozie Okereke, by a Muslim cleric, Kazeem Alimson, popularly known as Alfa.

The incident, which was described by security operatives and neighbours in the area as ‘the most bizarre occurrence in the neighbourhood’ has sent shivers down the spines of residents, The Guardian reports.

One 15-year-old boy, Simon Kanu, confessed to have been paid N500 by the said Alfa in order to lure the baby, adding that the baby was killed with a heavy stone in his presence.

Explaining how the deceased, Chiagozie Okereke, got missing, his distraught mother, Mrs. Chinasa Okereke, said: “Around 7:00p.m. yesterday (Tuesday), I brought my children out to bathe him.

“When I finished bathing the younger one, I went inside to get the wrapper to strap him in order to enable me bathe the other child. But on getting outside, I didn’t see my baby again. The sister said he went into my neighbour’s house but I didn’t see him there and when I asked, they said he went out with Simon.

“I called my son’s name but there was no response. Later, we saw Simon that night, I asked him about the whereabouts of my son, he said he did not see him. Simon took my son, strangled him with his shirt and stoned him to death. He is my third child. I feel hurt. My heart is broken. I need justice.”

The Isheri Osun Divisional Police Officer (DPO), Emeodi Camilus, a Chief Superintendent of Police (CSP), who got a tip-off, rushed to the scene and arrested the two suspects.

During interrogation, Simon confessed that he was given N500 to lure the missing child to where the Alfa was waiting for him. He disclosed that the Alfa took him and the child to an uncompleted building where the boy was murdered with a heavy stone.

According to the primary six pupil, “I went to site and I saw how he killed Chigozie. He tied him up and was making incantation before hitting him with a stone three times. He said he would kill me if I told anybody. He also showed me his juju knife and that he would use it to kill me if I told anyone.”

However, on his part, the cleric denied the allegation, claiming that he is not a ritualist but a cult member.He said: “I was in my house sleeping when I heard people shouting. When I came out, I saw some policemen and when I asked, I was told that they saw a dead child. I went back inside, and 30 minutes later, the police came back and arrested me. I don’t know the boy and I have never spoken to him.”

At this point, the teenager interjected and said, “You are lying. He was giving me sign with his eyes not to talk. I saw you when you were using the stone to hit him until he died.”

When The Guardian visited the scene, hundreds of residents besieged Akogun Street, giving different versions of what happened. But for the police intervention, the angry residents would have summarily executed the Alfa in another incidence of jungle justice.

At the scene was the Divisional Police Officer of Isheri Oshun, who was on ground to pacify the crowd from taking laws into their own hands.He told The Guardian: “When the police became involved, I directed that all the persons involved be arrested, including the boy. It was after he was picked up that he confessed.

“He led us to the Alfa and we arrested him. We searched his house and the environs. We found the boy dead in the uncompleted building. He said they tied his hand and leg with red clothes and while muttering incantations, stoned the deceased three times before he died.”