Man to be flogged for assault 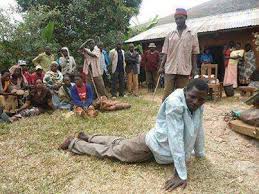 A Karmo Grade 1 Area Court, Abuja, on Thursday ordered that 30-year-old, Abdulrahaman Sale, be given six strokes of the cane for assault.

Sale of Utako village was convicted on a count charge of assault.

The Area Court Judge, Abubakar Sadiq, gave the order after the convict pleaded guilty to the charge.

The prosecutor, Dalhatu Zannah, had told the court that one Mohammed Husseini of Berger Out Station, Abuja, reported the matter at the Utako Police Station on March 6.

Zannah said that on the same date at about 7.30 p.m. at Berger roundabout, the convict intentionally engaged in a fight with someone.

According to the prosecutor, when the complainant tried to stop him, he assaulted him for no cause.

He said that the convict made a confessional statement admitting his guilt.

Zannah said that the offence contravened Section 262of the Penal Code.