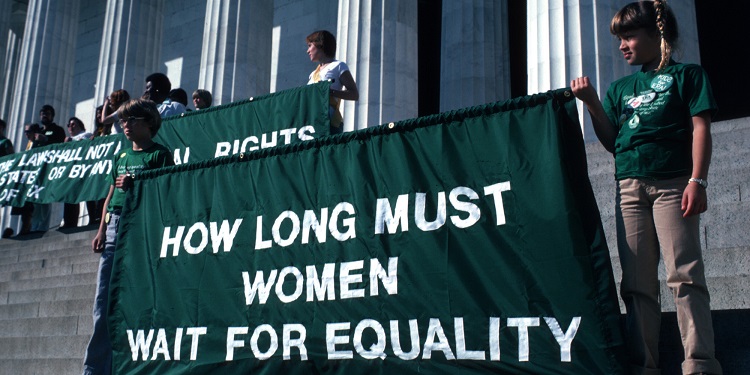 FILE PHOTO: Young girls hold up banners supporting women's equality at the "Call to the Nation's Conscience" ERA rally on the steps of the Lincoln Memorial October 12, 1981 in Washington, DC. The Equal Rights Advocates (ERA) is dedicated to guaranteeing women equal opportunity and the rally was held on the final day of the NOW National Conference. (Photo by Penelope Breese/Liaison)

Nigeria has led advocacy campaign for the promotion of women’s property rights in Africa, saying it is a panacea to achieving women economic empowerment in the continent.

The Senior Special Assistant to the President on Sustainable Development Goals (SDGs), Princess Adejoke Orelope-Adefulire, hosted Africa’s women parliamentarians at a side event at the ongoing UN Commission on the Status of Women in NewYork.

Orelope-Adefulire regretted that women were still discriminated against in Africa in the area of rights to inherit property.

“Women are special; we should be celebrated everyday and there is no reason why our rights should be eroded.

She pointed out that advances in entrenching women’s property rights in Sub-Saharan Africa was quite slow adding, efforts to advance this cause have been feeble.

“The inhibitions placed on women in many family and inheritance laws across the world systematically prevent the full realization of economic rights with poverty as a consequence.

“There is therefore an urgent need to address the legal pluralism that guides inheritance laws in many nations, a situation where different systems of laws operate simultaneously with attendant negative consequences on the vulnerable in such societies.

“Where possible, it is important to reform or harmonize these legal systems to ensure that women who marry under local statutes, customary or religious laws and other such arrangements are not treated differently,” she said.

Orelope-Adefulire, however, called for the inclusion of men to support women in their agitation for gender parity.

“We need to bring our men on board to understand the problem, why we are agitating and for them to know that it is in their own interests also,” she said.

She called for the empowerment of women and sustained advocacy for women to know the laws, how to defend their rights and seek redress.

“As you are aware, there is empirical evidence that demonstrates that investing in women matters for poverty eradication.

“It is worth reiterating that gender is a determining factor in poverty-environment linkages as gender inequality, environmental deterioration and deepening poverty are mutually self-reinforcing.

“Improvement in any one of these three enhances livelihoods, improves resilience and reduces vulnerability.”.

The president’s aide said majority of African countries were signatory to many international agreements targeted at improving gender equality but regretted that they were yet to meet the minimum conditions required to attain gender parity.

“Across the world, societies that accord gender equality the priority of place it deserves strive diligently to engender women’s property rights.

“They are thereby able to unlock the full potentials of women and girls, with attendant rapid national development.”

Fayemi pointed out that Ekiti state is the only state in Nigeria that has domesticated the National Gender Policy, an effort she championed when she was the first lady.

She advocated legislative framework, activism and for women to exercise their political strength by electing women activists and feminists into political offices to ensure that gender equality becomes a reality by 2030.

“We should do something lasting and not clapping and dancing for our husbands to get elected into offices,” Fayemi said.