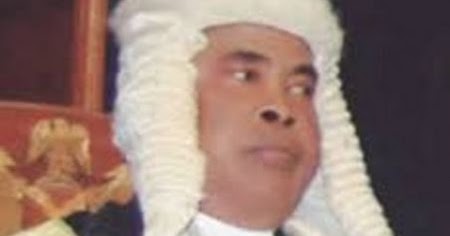 Nigeria’s government on Thursday amended the corruption charges it preferred against a Justice of the Supreme Court, Justice Sylvester Ngwuta, before a Federal High Court in Abuja.

The lead prosecuting counsel, Mrs Olufemi Fatunde, who took over the case from the former prosecutor, Mr Charles Adeogun-Philips in February, announced the amendment before Justice John Tsoho on Thursday, PUNCH reports.

Fatunde, a former Director of Public Prosecutions of the Federation, said the amendment to the charges was done under section 216 of the Administration of Criminal Justice Act.

Announcing the development on Thursday, she said, “The prosecution intends to amend the charges against the defendant in this matter.

She then applied for the correction of some typographical errors on the document.

Lead defence counsel, Chief Kanu Agabi (SAN), did not oppose the amendment and the corrections done to the amended charges.

The amended charges were thereafter read to the defendant who, again pleaded not guilty to all of them.

After taking a fresh plea to the charges on Thursday, Fatunde sought the judge’s permission to be allowed to tender some exhibits through the first prosecution witness, Mr. Nwamba Chukwuebuka, who had earlier on January 18, given his evidence-in-chief, later cross-examined by the defence and was waiting for re-examination by the prosecution.

The permission was granted, and the lead prosecuting counsel thereafter indicated that the exhibit sought to be tendered were three bags containing some cash allegedly recovered from Justice Ngwuta’s home in Abakaliki, Ebonyi State last year.

Chukwuebuka, a building contractor said to have been engaged by Justice Ngwuta to build some houses in Abakaliki, identified two of the three bags which the prosecuting counsel later tendered as exhibits.

The bigger of the two bags with ash colour contained some documents while the other one, brown in colour, was loaded with N4,365,840 cash.

Agabi said he had no objection to the tendering of the bags.

The two bags were admitted as exhibits.

The witness had earlier testified on January 18, that there was originally N27m contained in the bags, but that substantial part of the money had been expended on the building projects before the bags were discovered by the operatives of the Department of State Service.

The money is different from other huge foreign and local currencies recovered by the DSS operatives from the Abuja home of the Justice of the apex court on October 7, 2016.

Fatunde also sought the judge’s permission to open the bags in order to reveal their contents.

The permission was granted.

But before the bags were opened, in response to Fatunde’s question, Chukwuebuka said, “I spent about N23m out of the N27m on the ongoing projects.”

He also said, “The remnant was counted in my presence and it came to approximately N4m – it was little above N4m. There were remnants of small denominations that I didn’t take the time to count.”

The prosecuting counsel also tendered the statements made to the DSS by the witness.

The witnesses dated, November 12 and November 13 and 17, 2016, were admitted as exhibits without objection.

Agabi was given another opportunity to cross-examine the witness.

The witness confirmed under cross-examination, that he made three statements to the DSS but erroneously stated them as two when he was testifying during the previous proceedings.

He said, “We didn’t conclude the first day. They said I should rest, nd continue the next day. The third was the one I made when we traveled from Abuja to Abakaliki. They asked me to write about all that took place when we traveled.”

Fielding further questions from Agabi, the witness also confirmed that the bags and the contents belonged to the defendant.

He said, “The two bags belong to the defendant. I am very sure

“Nobody else has laid claim to the content of the bag.

“I began to use the content of the bag because I was satisfied that it belonged to the defendant.

“Even now I am convinced that I did was right.

“The bags were not the only properties in the house of the defendant by the time I moved them. There were other properties.

“Nobody else has laid claim to the other properties.

“There is nothing in that house that I felt a man in his rank could not own.

“To the best of my understanding, the defendant was not trying to hide anything.

“I made the statement in defence of myself.”

The judge has taken a short break to enable the prosecution to call another witness thereafter.