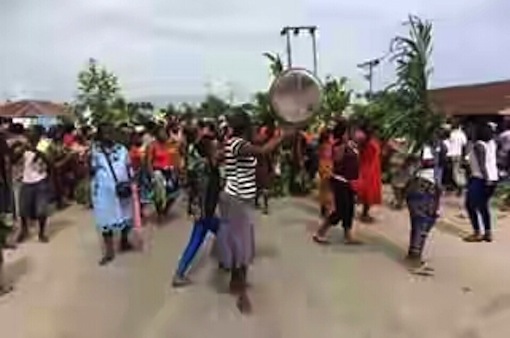 Some traders in Mile 1 market, Port Harcourt on Thursday took to the street to protest alleged notice of eviction presented to them by the Rivers Government.

The government through its Ministry of Lands and Survey in a letter dated February 17, ordered the traders to vacate a temporary market, at Old Cultural Centre Mile One, within 14 days of notice.

The Ministry, in the letter, warned that the traders would be forcefully ejected if they failed to vacate the market within the stipulated time.

Mr Innocent Okogbule, a legal practitioner and Counsel to the protesting traders, in his reply to the government on behalf of the traders, said that the state government reneged on its agreement with the traders.

According to him, the traders under the aegis of Mile One Market Traders Association (MOMTA) were relocated to the temporary site by the government after their former market was gutted by fire in 2013.

“After the fire incident in which many died and lost properties; the living amongst them mobilised themselves and erected temporary structures beside their respective burnt shops to display their wares.

“After resettling themselves, the Rivers government, touched by their plight and driven by the need to forestall future occurrence, declared the interest to build a Phase two of the Mile One Market.

“Thereafter, the state government in collaboration with the PortHarcourt City Council after meeting with MOMTA, decided to relocate the traders to Njemanze, Urualla and Old Cultural Centre – their current temporary site.

“In spite the setback the relocation would cause to their businesses, the traders accepted to move to the temporary site to enable the government to build a permanent market devoid of incessant fire incidents,” he said.

Okogbule wondered why the state government took the decision to eject the traders after it signed an agreement with the traders’ union allotting the temporary site to them.

He described the move by the state government as shocking and insensitive especially as the traders were not invited to discuss the matter.

The counsel urged the Ministry to exercise restraint and consult widely with the PortHarcourt City Council on the true position of the temporary site with a focus on a peaceful resolution.

“The traders are at the current site at the behest of the state government and will gladly return back to the area earmarked for phase two of Mile One market within 24 hours.

“But the traders would legally resist any attempt to forcefully eject them from the Old Cultural Centre without allowing them to return to the space at Mile One market from where they were removed.

“We advise that the offensive notice be rescinded within seven days in the interest of peace and security and to avoid any possible breakdown of law and order,” he said.

Okogbule expressed concern that hoodlums might take advantage of the notice to loot wares in the guise of working for the state government as agents or task force.