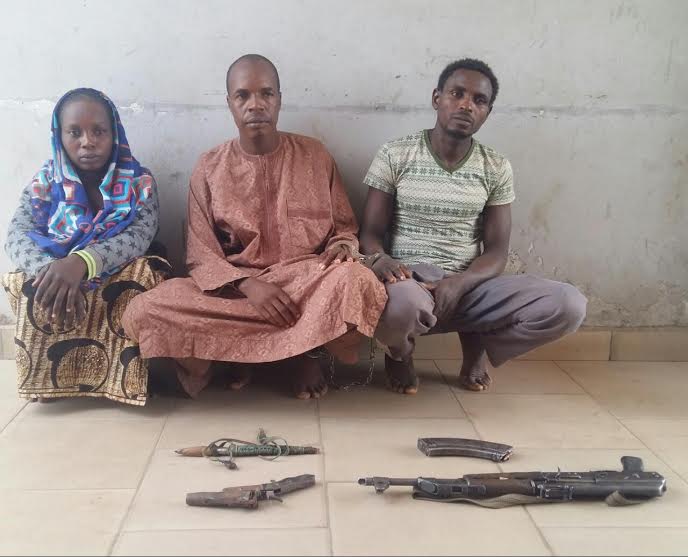 The police have arrested three members of  an armed robbery and kidnap syndicate and recovered  from them one AK 47 rifle, a locally made pistol, 30 round of rounds of live ammunition, Samsung phone and charms.

A statement from the Force Public Relations Officer, CSP Jimoh Moshood said the Inspector General of Police’s Intelligence Response Team (IRT) working in synergy with Technical Intelligence Unit (TIU) smashed and arrested the three members of the an armed robbery/kidnap for ransom gang on 15 March, 2017 in Zaria, Kaduna State.

“The gang has been on the wanted list of the Nigeria Police Force for some time now. In the course of investigation, they admitted to be responsible for some kidnappings and robberies on Zaria- Kaduna Expressway in Kaduna State.

“The last suspect, Aisha Bature, 23 years, is the wife of the gang leader and it was in a toilet in her house that AK 47 rifle fully loaded with ammunition was recovered,” he said.

Moshood said the three suspects confessed to the crime and explained to the Police investigators the various criminal roles they played in the commission of the various offences traced to them.

“They were equally identified by some the victims. Meanwhile, investigation is being intensified to arrest the other members of the gang still at large. All the suspects will be arraigned in court on completion of the investigation,” he added.