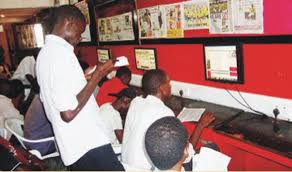 An Ilorin based legal practitioner, Mr Juwon Gbadebo, has called on the Federal Government to urgently address the issue of underage people that were fast getting hooked to betting.

Gbadebo, in Ilorin, decried the influx of the underage people into the various betting centres across the country.

He said that nowadays betting centres like Bet9ja, NairaBet, Bet360 and Baba Ijebu were being filled daily with teenagers, especially during the school period.

“It is bad for our society to condone such act. Imagine a young boy of less than eighteen years patronising bet house.

“It spells doom for the future of this country.

“It is disheartening seeing these underage at bet houses; instead of stay in their classes studying, they are now playing gambling games during the school hours.

“Something urgent must be done to curb the menace in order to rescue the future of this upcoming generations,’’ he said.

He called on the security agents to ensure proper monitoring of the bet centres and arrest any underage caught engaging in betting.

The legal practitioner also advised the government to show a great commitment to discourage such act by the underage in order to clean the society of bad practices.

The lawyer said it was worrisome that managers of bet centres only care for the money they would make and never mind to question the children and send them out.

He further suggested that any bet centre that harbour the underage should be closed down.

Gbadebo also advised parents and guardians to closely monitor the movement of their children and wards and discourage them from going near the bet houses.