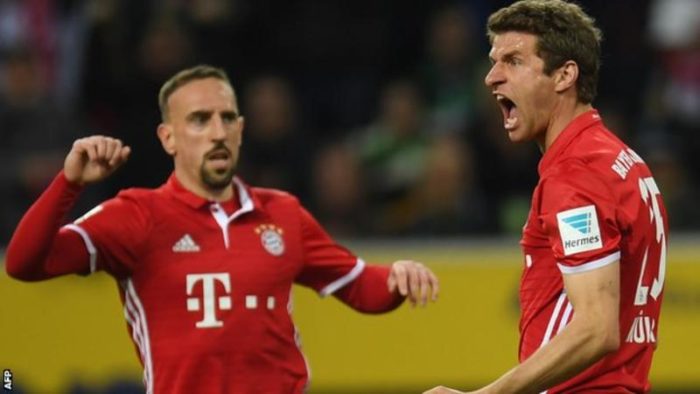 Thomas Muller’s second-half goal sent Bayern Munich 13 points clear at the top of the Bundesliga as they beat Borussia Monchengladbach.

But Carlo Ancelotti’s side made hard work of it despite dominating possession, with Arjen Robben hitting the post in the first half.

Muller drove in from Thiago Alcantara’s chip midway through the second half, BBC reports.

The goal, Muller’s second in the Bundesliga this season, kept Bayern on course for a fifth successive league title.

Bayern were not at their best, with top scorer Robert Lewandowski heading over from Muller’s cross early on, and skewing a shot wide when well placed after half-time.

Ancelotti’s side eased off after taking the lead, and might have paid for that, with Javi Martinez almost turning Thorgan Hazard’s cross into his own net, and making a vital block to deny Josip Drmic.

In Sunday’s other Bundesliga game, Schalke moved up to ninth with a 1-0 win at Mainz, secured by Sead Kolasinac’s goal five minutes into the second half.