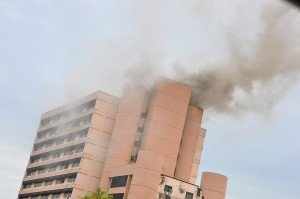 The hotel on fire

A chieftain of the opposition Peoples Democratic Party (PDP), Dr Isaac Ojukwu, has set himself ablaze in a rented hotel apartment in Nyanya, a satellite town of Abuja, Federal Capital Territory (FCT).

The incident which occurred early hours of Thursday, also saw the entire hotel burnt to ground level, even as the deceased was equally burnt beyond recognition.

LEADERSHIP Sunday gathered the late Dr Ojukwu was a member of the PDP, Diaspora unit. He was said to have handled the diaspora unit of the Party in Germany, Denmark among other foreign countries.

Document and other files found in his luggage rescued in the hotel indicated a strong connection to the Party hierarchy, some of which showed he might be connected to a serving Governor in a PDP controlled state.

The new revelation has sent shock waves among sympathizers who have been trooping to the hotel site, wondering what could have led to such abnormal behavior.

Narrating the ugly incidence, the Owner of the burnt Hotel and Associate Professor at the Nasarawa State University, Keffi, Sylvanus M. Itodo, said it still remained a shock, how an adult would just wish to take his own life, without known cause.

“We were all sitting together that fateful night before he left to watch football match and I also left the hotel premises by 11pm, to go and sleep.

“It was around 12am that I recieved a phone call from one of the boys in the hotel, crying, that my hotel was on fire. Before I could get to the hotel, the flame was everywhere; and it took the efforts of the Federal Fire Service to prevent the inferno from escalating to the surrounding houses”, Itodo lamented.

Investigations also revealed that, the deceased, who hailed from Ohuhu in Umuahia area of Abia State, has been staying in the apartment, Boundary Plaza Hotel, Nyanya, for the past 5 years.

Though it was gathered that he was married to a German woman with kids, it was, however, revealed that, none of his family members, including the wife or children, had paid him a visit all through his stay in the hotel.

An eye witness account by his direct neighbour, Ohize Yakubu, who has been living in the hotel apartment since the day of his wedding in 2013; said, those lodging in the hotel made frantic efforts to pull the deceased out of the building but he struggled and ran back into the burning room.

“We went to watch Arsenal and Bayern match that night, I came back to the hotel and Dr. Isaac came in 5 minutes later. After some minutes, I started hearing strange sound from his room, which is directly opposite my room.

“At first, I was scared to open door, because I didn’t know if it was a robbery attack, until I heard and recognised the voice of one of our neighbours, beckoning on Dr. Isaac to open door and come out, shouting fire, fire.

As at the time of filing this report, no one could explain in clear terms, what might have gone wrong with the deceased, to have warranted him taking his own life. Even though the Corpse has been deposited at the Asokoro General Hospital by the Police, but the family members are yet to arrive Abuja.

A source at the hotel also revealed that the deceased had early this week, moved all his belongings, including clothes, to another chalet within the hotel premises, saying he would love to change his room.