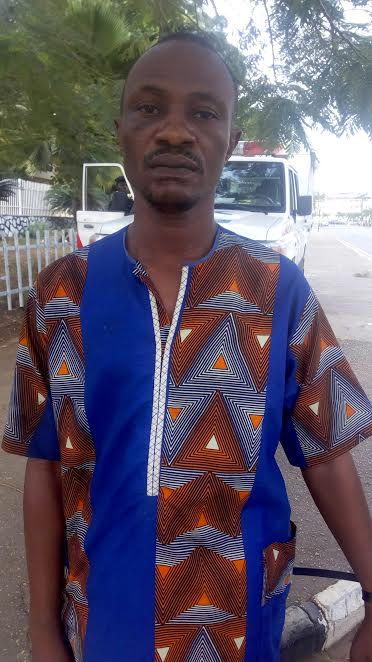 The operatives of Rapid Response Squad, RRS, of the Lagos State Police Command have arrested the suspected ring leader and architect of several bank frauds in Lagos State.
The suspected fraudster, Ajisafe Olugbenga, 47, from Osun State, was allegedly the mastermind who has been fingered in several bank frauds.
Ajisafe, an ex-banker, who is popularly known as Harrison among his gang, was arrested last Tuesday after he was mentioned as the initiator of sims swap deal at a network provider’s outlet in Surulere, Lagos and Abeokuta, Ogun State.
Ajisafe had before his arrest last Tuesday being on the run over his involvement in a N2 million fraud in one of the old generation banks in Lagos State sometime in April, 2016.
The suspect, who is regarded as the chief distributor of roles in all the bank frauds, was alleged to have a vast network with insiders in banks.
Ajisafe was also alleged to have exploited his vast network with insiders in banks to procure bank details of high net worth customers. It is this information such as account balance, account number and phone number of the owner and e-mail that the gang work on to perpetrate the fraud.
According to sources, the gang blocks or swaps the sim of the bank customer so that he or she did not receive the transaction on the account, which were mostly perpetrated on a weekend when the money were withdrawn in tranches.
Before this, the bank insider, who has his or her cut on every transaction, would have helped the gang to increase the customer’s withdrawal limit.
Sources disclosed that when the suspected fraudsters were arrested, several print outs of customers details were found with the group. It was further revealed that the balances on all the print outs was over N800 million.
Those arrested for prosecution in that case included Michael Adeoye, Ayo Olalekan, Israel Ochenehi, Adegbenro Opeyemi, Obong Udeme – Obot and  Peter Ezurike.
The fraud detection in 2016 instigated the Lagos State Commissioner of Police, Mr Fatai Owoseni to convoke a meeting of bank executives with analysis of strategies adopted by the fraudsters.
It was further disclosed that Mr. Owoseni had urged banks in Lagos State to raise the bar of their anti-fraud internal mechanism.
Ajisafe latest offence was the recruitment of three suspects through which some sim cards belonging to a particular network (name withheld) were being swapped and used for some of the gang’s bank fraud.
Two of the suspects recruited by Ajisafe for the sim swap; Shamsudeen Olalekan, 35 and Nicholas Egbele, were arrested few days before Ajisafe was picked up on Tuesday.
Also arrested with them was a staff of a popular network provider in an outlet in Abeokuta who has been assisting the gang in sim swapping while another collaborator is said to be on the run.
Olalekan and Egbede had disclosed that they were promised N20,000 for every sim card swapped for the gang.
They also disclosed to the police that Ajisafe upon supplying him their passport photographs procured national ID cards, with names of bank’s account holder. This is to be accompanied with sworn affidavit on loss of sim card.
Sources revealed that several details of bank customers sent via sms to Ajisafe’s line by some people believed to be banks’ insiders have been retrieved from his phone.
The fraudsters according to sources met in Idi – Araba, Mushin, National Filling Station in Ikeja Along, Kotangoa Market, Alimosho to perfect their plans whenever they have jobs and to share money.
Ajisafe in a statement to the police said, “about year ago, Joe Calabar approached me that he needed someone in … Bank to increase limit (daily), I spoke to a friend Chima, who was in … Bank. Both of us met Israel at a joint in Skakhor.
The following day, we were all to meet to give a form to Chima. I noticed that too many calls were coming on my line, so I didn’t turn up for the meeting. It was later that I heard RRS has arrested Chima”.
Confirming the incident, the Police PPRO, ASP Olarinde Famous Cole, said that there would be no hiding place for criminals in Lagos State adding that officers of the command are at alert to nip crime in the bud.
The four suspects have been transferred to the SCID, Panti for further investigations.
Tags:   Bank fraud syndicate   Lagos