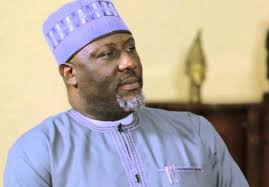 Kogi West representative, Senator Dino Melaye is currently in the eyes of the storm over his degree in Geography from the Ahmadu Bello University, Zaria, as some examination officers of the institution are insisting that the senator never graduated from the school.

Melaye who had been in the news lately, however claimed that there were plans to witch hunt him by the Economic and Financial Crimes Commission (EFCC) because he was a major factor that stood against the confirmation of Ibrahim Magu as chairman of the anti-corruption organisation.

According to Sahara Reporters, Melaye never graduated from the Department of Geography at ABU.

The report said that the DSS was alerted over this but that the security agency covered it up and allowed the man blossom.

“At least three exam officers at ABU, Zaria insist that Dino Melaye never graduated from the Geography department, DG DSS alerted but covered it up,” the report said.

The officers also claimed that Melaye’s name was not on the graduation list and further accused him of bribing his head of department.

Wikipedia reports that Dino Melaye graduated with a Bsc in Geography from Ahmadu Bello University, Zaria, adding that about 30 undergraduates are currently enjoying scholarship under his education empowerment fund.