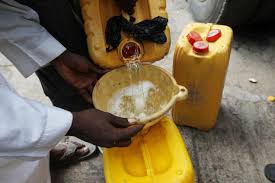 Five men were on Tuesday arraigned in a Karmo Grade 1 Area Court, Abuja, for allegedly stealing 1,910 litres of diesel.

The defendants were- Andrew Samaily, a cleaner; Alpha Misa, Sunday yunana, and Ayuba Matthew, all of Unity Security Wuse 2, Abuja, and Amos Sadi, a labourer of no fixed address.

The defendants, who were arraigned on a two-count charge of joint act and theft by servant, all denied committing the offences.

The judge, Mr Abubakar sadiq, granted them bail in the sum of N50,000 each, with a surety each in like sum.
He adjourned the matter till April 27 for hearing.

The prosecuting counsel, Mrs Auhioboh Florence, had informed the court that on March 17, Ilorin Toyin, of Suit B7, Rukayya Plaza, Jabi, Abuja, reported the matter at Gwarinpa Police Station.

Florence said that during police investigation, 50 litres of diesel was recovered and it was also discovered that they had previously stolen 1,860 litres from the same tank.