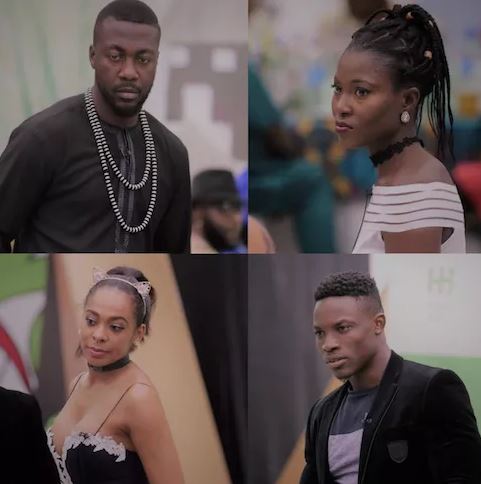 The nominated for possible eviction this week are Bally, Debbie-rise, Tboss and Bassey.

Four among the remaining seven housemates were on Monday put up for eviction in the ongoing reality TV show, Big Brother Naija.

The housemates for possible eviction on Sunday are Tboss, Debie-Rise, Bally and Bassey.

They got the highest nominations for possible eviction this Sunday.

Efe, who is the current Head of House is immune from eviction and he confirmed the four housemates for possible eviction to Biggie in the Diary Room.

Efe was first nominated in January for eviction, but he survived. He was again nominated last week, but he also survived and turned out to be the fans favourite, getting more than 50 percent of the votes.

At least one among the four nominated housemates would be evicted from the show on Sunday.

Since the inception of the show in January, seven of the housemates have been evicted.

Kemen was disqualified for breaking house rule; he cuddled Tboss while she was asleep close to him.

Apart from Efe, the two other housemates free from eviction are Bisola and Marvis.

The winner will go home with the prize of N25 million naira and a brand new KIA Sorento SUV.