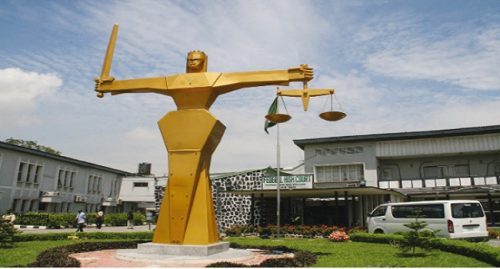 The absence of Justice Ayokunle Faji of a Federal High Court in Lagos on Tuesday stalled the trial of Maj.-Gen. Emmanuel Atewe and three others charged with N8.5 billion fraud.

The accused are standing trial on an amended 22-count charge bordering on conspiracy and money laundering.

The Economic and Financial Crimes Commission (EFCC) had alleged that the accused used seven companies to divert N8.5 billion from the coffers of NIMASA from Sept. 5, 2014 to May 20, 2015.

The court has yet to fix a new date for the trial as both prosecution and defence counsel were unable arrive at a convenient date.

The accused were re-arraigned before Justice Faji on Feb. 3, following the transfer of the former trial judge, Justice Saliu Saidu, from Lagos to Port Harcourt.

They pleaded not guilty, and were allowed to continue on the bail terms granted by Saidu.

At the last sitting of the court on the case on Feb. 17, the first Prosecution Witness (PW1), Mr Nkem Ahidjo, began his evidence-in-chief.

The witness, who is an Abuja-based businessman, had told the court how about N35 million out of the alleged fraud sum of N8.5 billion was diverted by the accused and paid to the Living Faith Church.

He told the court that he transferred the said N35 million on the order of Atewe to the church, adding that he had no idea of the purpose.

The alleged offences contravene the provisions of Section 18(a) of the Money Laundering (Prohibition) (Amendment) Act, 2012, and Section 390 of the Criminal Code, 2004.