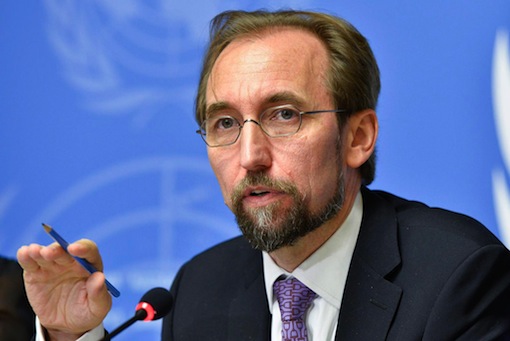 The UN High Commissioner for Human Rights, Zeid Al Hussein, has called on governments to take immediate steps to halt hate speech and hate crimes in the society.

Zeid made the call on the International Day for the Elimination of Racial Discrimination, commemorated annually on March 21.

The human rights chief reminded governments that they had a legal obligation to stop hate speech and hate crimes, and called on people everywhere to “stand up for someone’s rights”.

“Politics of division and the rhetoric of intolerance are targeting racial, ethnic, linguistic and religious minorities, and migrants and refugees.

“Words of fear and loathing can, and do, have real consequences,” the UN High commissioner’s statement said.

The theme for the 2017 event is “Ending Racial Profiling and Incitement to Hatred”, including as it relates to people’s attitudes and actions towards migration.

He recalled the Summit for Refugees and Migrants in September 2016, where UN Member States adopted a Declaration strongly condemning acts and manifestations of racism, racial discrimination, xenophobia and related intolerance.

The Summit also sparked the UN’s Together initiative to change negative perceptions and attitudes aimed at refugees and migrants.

Zeid said that States do not have any excuse to allow racism and xenophobia to fester.

States “have the legal obligation to prohibit and eliminate racial discrimination, to guarantee the right of everyone, no matter their race, colour, national or ethnic origin, to equality before the law,” the senior UN official said.

He urged governments to adopt legislation expressly prohibiting racist hate speech, including the dissemination of ideas based on racial superiority or hatred, incitement to racial discrimination, and threats or incitement to violence.

“It is not an attack on free speech or the silencing of controversial ideas or criticism, but a recognition that the right to freedom of expression carries with it special duties and responsibilities,” Zeid said.

To promote human rights, the UN High Commissioner’s office promoted a campaign slogan asking people around the world to “Stand up for Someone’s Rights Today”.

The campaign urged people to take practical steps in their own communities to take a stand for humanity.