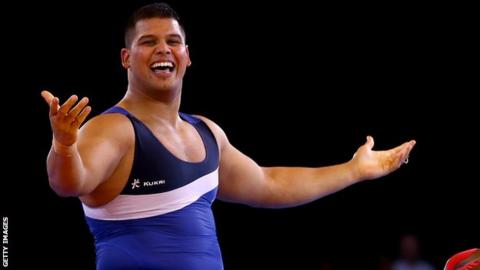 British wrestler Chinu Sandhu, who won Commonwealth Games bronze medal in 2014, has been banned for four years after failing an out-of-competition drugs test.

The 29-year-old Sandhu, who competed in the 125kg men’s freestyle, tested positive for an anabolic steroid in September.

“It is sad that his reputation within the sport has been tainted because of his own actions,’’ UK Anti-Doping (UKAD) chief executive Nicole Sapstead said.

British Wrestling, in a reaction, said the news was “extremely disappointing’’.

Sandhu argued he had not acted intentionally and that the positive sample had resulted from taking a contaminated supplement.

“Athletes are solely responsible for any substance which is found in their system, regardless of whether there is an intention to cheat or not,’’ Sapstead added.

“No-one can ever guarantee that a supplement is free from prohibited substances and taking them will always carry an element of risk.’’

Sandhu’s ban has been backdated to start from last Oct. 14, meaning it will run until October 2020.

“It is extremely disappointing news — for the athlete and the sport,” added British Wrestling Association chief executive Colin Nicholson.

“The sport is working with UKAD to make sure that athletes are educated in anti-doping.

“The British Wrestling Association has a zero tolerance approach to doping in sport and believes in wrestling clean.’’