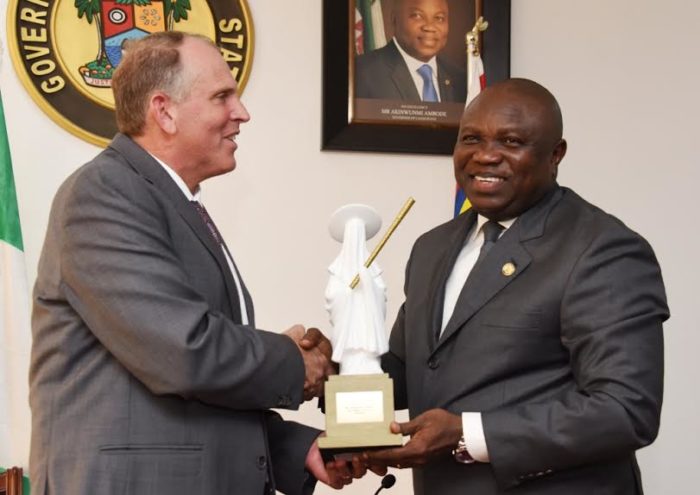 Lagos State Governor, Mr Akinwunmi Ambode on Wednesday assured that his administration will complete the ongoing construction of Ajah Flyover by the end of May 2017, just as he revealed the plans of government to demolish three more roundabouts in Lekki-Ajah corridor to ease vehicular movement.

Ambode, who spoke at the Lagos House in Ikeja, Lagos, Southwest Nigeria when he received the management of Chevron Nigeria Limited led by its Chairman and Managing Director, Mr. Jeffrey Ewing, said the roundabouts would be removed starting from next week, adding that the action was in line with the resolve of government to totally eliminate traffic in the axis.

The affected roundabouts, according to Governor Ambode, are Igbo Efon, Chevron and Third Roundabout.

He said since assumption of office, his administration had tried as much as possible to improve on the business environment, and assured that government would continue to invest in security and infrastructure to make life comfortable for residents and investors.

“We have tried to improve services within the State and the area of operation of Chevron which is the Lekki axis is not left out. Few weeks back, we improved on the traffic management towards that axis and we believe that the move would also enhance productivity of the people.

“I also like to use this opportunity to say that because of the impact that we have seen in the elimination of roundabouts in the Lekki axis, we have actually approved another exercise and starting from next week, we will commence the elimination of additional three roundabouts in the axis most especially Chevron, Igbo Efon and Third Roundabout. We believe doing that will totally eliminate traffic in that axis and we hope to also open the Ajah Flyover before the end of May,” Ambode said.

He noted that the essence of government was to create the enabling environment for businesses to thrive, assuring that he would continue to do his best to provide safe and sound environment.

“Security will be improved upon; we don’t think we have gotten to the ideal state but we will continue to expend resources efficiently on security to ensure that the businesses that come to Lagos and the ones existing in Lagos will continue to thrive,” he said.

Besides, Ambode commended Chevron Nigeria for provision of jobs for people in the State, sound Corporate Social Responsibility (CSR), as well as being dutiful in the payment of taxes, and expressed readiness to partner with the organization in the interest of the people.

Earlier, Ewing said he was at Lagos House to further advance the partnership that had existed between Chevron and Lagos State, saying that the organization has had a robust relationship with the State for over five decades.

Ewing particularly noted the significant improvement that the present administration in the State had carried out in various sectors of the economy such as road construction, investment in security and education, among others.

He particularly expressed willingness of Chevron to scale up partnership with the State Government in terms of CSR especially on healthcare delivery, education, among others.