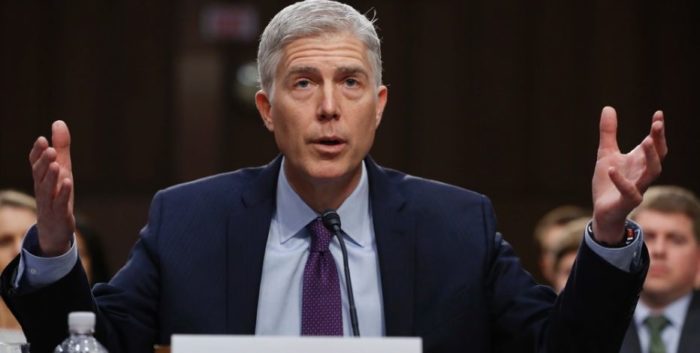 Gorsuch previously made those comments in private conversations with senators, but Tuesday marked the first time he went on the record with his disapproval of the president’s rhetoric when he called US District Judge James L. Robart a “so-called judge.”

“When anyone criticizes the honesty, integrity, the motives of a federal judge, I find that disheartening, I find that demoralizing, because I know the truth,” he said during his Senate confirmation hearing, in response to a question from Sen. Richard Blumenthal about Trump’s tweets.

Asked by the Connecticut Democrat if that “anyone” included the President.

“Anyone is anyone,” Gorsuch said.

Blumenthal pressed Gorsuch on the President’s tweets, including one in which he called the federal judge who ruled against his travel ban last month a “so-called judge.”

Asked how he would feel if the President called him the same thing, Gorsuch declined to talk about “specific cases … that might come before me” but judges getting criticized in general.

“Judges have to be tough. We get called lots of names, all over the place. We have to accept criticism with some humility. Makes us stronger and better,” he said.

Gorsuch argued that the First Amendment and right to free speech applies to the President as well, but said he empathizes with judges because he knows “how hard their job is.”

“I know these people,” he said, before going on to repeat that such criticism can be “demoralizing” and “disheartening.”