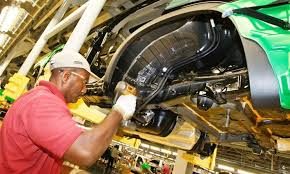 The Kano State Government has trained 72 youths in various fields of automobile engineering as part of effort to reduce unemployment and youth restiveness in the state.‎

Gov. Abdullahi Ganduje, disclosed this on Thursday in Kano during the graduation ceremony of the beneficiaries at the Government House, Kano.‎

He said that the youths were trained for a year at the Peugeot Automobile of Nigeria (PAN) learning centre in Kaduna.‎

Ganduje said the state government would also train 100 males and 50 females as auto mechanics in order to enable the state produce the highest number of automobile engineers in the country.

He further disclosed that the state government spent over N200 million in the training and empowerment of the youths.

The governor gave the assurance that the government will engage more youths in the training programme to enable them be self-reliant and contribute their quota toward the development of the state and the country.

The minister of Labour and Employment, Dr. Chris Ngige commended the Gov. Ganduje for providing source of livelihood for the youths in the state.

He said that the Federal Government would introduce training in interlock tiles and plaster of paris(POP) in the eighth skill acquisition centers across the country.
‎
He said that the training of the trades would go along way in reducing the level of poverty and unemployment among the teeming number of youths in the state and the country.‎
‎
Ngige also restated the federal government’s commitment to creat job opportunities for the youths in the country.

The Managing Director of Peugeot Automobile Nigeria (PAN), Mr Ibrahim Boyi, said that the company would link some of the beneficiaries up with their customers so that they could be absorbed to render services.

He, however, urged them to be upright and use the training to become self reliant.
‎
One of the trainees, Yahaya Musa, thanked the state government for providing them the opportunity to become self-reliant and shining examples among their peers.