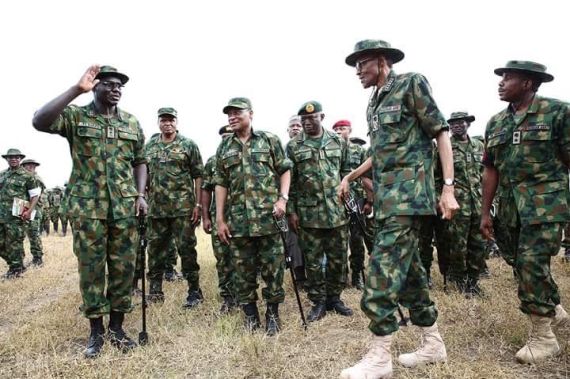 President Muhammadu Buhari is heading to the once dreaded Sambisa Forest on Monday to declare open the Nigerian Army Small Arms Championship, NASAC 2017.

The insurgency group, Boko Haram, who at the peak of it’s siege on the nation occupied towns in Borno, Yobe and Adamawa states, made the Sambisa Forest their stronghold and strategic headquarters until they were pushed out by the military on Christmas eve, last year.

The military had subsequently declared the former game reserve as a proposed site for military institution, building roads into it and kick-starting the new status of Sambisa Forest with the hosting of the annual Small Arms Competition.

The competition which starts on Monday is expected to be hosted by Buhari. He is to be accompanied by the Minister of Defense, Alhaji Mansur Ali and Service Chiefs,  Chief of Defense Staff, General Gabriel Olanisakin, Chief of Army Staff, Lt. Gen. Tukur Buratai, Chief of Air Staff, Air Vice Marshal Abubakar Sadique and  Chief of Naval Staff, Vice Admiral Obet Ebas, PUNCH reports.

The Chief of Training and Operations, Army, Major General David Amadu, during a press briefing on Friday in Maiduguri to kick-start the NASAC 2017 championship, said the championship would  be formally declared open by the President on Monday.

He said the championship which drew to a close on Friday has lined up a chain of activities which would include medical outreach to Bama, Konduga, and Magumeri IDPs camps, educational training for Army Education Corps in Maiduguri , security awareness meetings with  the traditional rulers and distribution of relief materials to IDPs within Maiduguri and surrounding towns.

Amadu added that the championship was aimed at testing and shaping the intelligence and professional capacity of the Nigerian Army officers and soldiers as well as equipment.