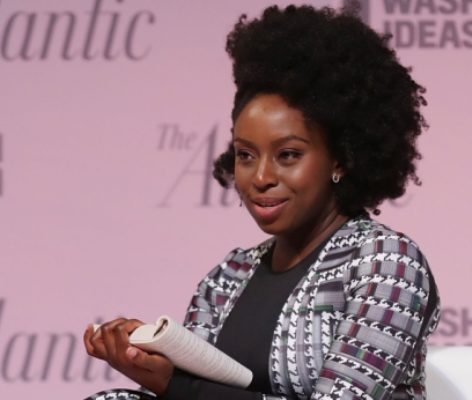 Nigerian author, Chimamanda Adichie has been named amongst the 50 greatest world leaders in the 2017 Fortune magazine ranking.

The ‘Half of a yellow sun’ writer was ranked at number 42 on the list with Chicago Cubs baseball team president Theo Epstein at number one.

Business mogul Jack Ma of AliBaba group of companies appears at number two and Catholic leader Pope Francis is in third place for his social integration projects as a clergy.

Melinda Gates is number four in recognition of the impact of the Bill and Melinda Gates Foundation which she co-chairs.

Colombian music superstar Shakira is at 27 for her philanthropic work through her Pies Descalzos (Barefoot) school foundation.

Just outside of the top five is Ava DuVernay recognized for her directorial work in Academy Award winning film, Selma and her forthcoming Disney adaptation, A Wrinkle in Time.

Chance the Rapper checks in at number 46, the 23-year-old hip-hop star is commended for his willingness to remain an independent artist and release his music for free and his education philanthropy in his Illinois, Chicago hometown.

Adichie’s book ‘Americanah’ recently won the “One Book, One New York” campaign from the New York City Mayor’s Office of Media and Entertainment in partnership with BuzzFeed.