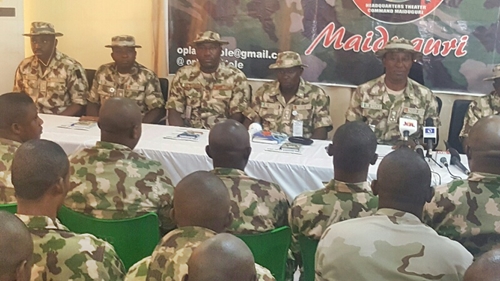 Brig.-Gen. Olusegun Adeniyi, the President of the GCM, gave the verdict during its sitting in Maiduguri.

Adeniyi said: “Captain Aroye, having found you guilty of the charge against you and having listened to the presentation of your service record and your touching plea in mitigation, this court hereby sentences you to a reduction in rank to 2nd lieutenant with four-year seniority on the rank.”

“The sentence is, however, subject to confirmation by the confirming authority as provided by Section 141 sub-section 2 and Section 152 sub- section 1A of the Armed Forces Act Cap 20 Laws of the Federal Republic of Nigeria 2004.”

Aroye, a combatant with the 118 Task Force Battalion of the Nigerian Army in Gubio, was said to have taken sides with some disgruntled soldiers by unruly announcing that he had quit the army in November 2015 after his unit suffered a huge setback in the fight against Boko Haram.