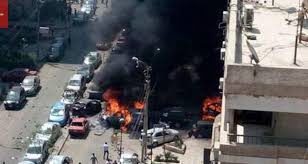 Egyptian Interior Ministry on Friday said that one man was killed and three others injured in an explosion in the Cairo suburb of Maadi.

The ministry in a statement said the man who was killed, was the ministry’s guard.

The authorities said that the man was killed when an unidentified metallic object he found exploded in his hands.

The ministry said that the man’s wife and two children were injured by shrapnel.

The authorities said that the injured have been moved to the hospital for treatment and the area had been cordoned off and is being combed by security forces.

The government is taking on militants in the Sinai Peninsula, where militants loyal to Islamic State are based, and Islamist groups elsewhere in the country who generally target security forces.

On Thursday, 10 members of Egypt’s security forces were killed by bombs which struck their vehicles in central Sinai.

A military spokesman said the forces killed 15 people and arrested seven others during an operation targeting what the army described as terrorist bases.

They also found and destroyed half a tonne of TNT explosive, and seized two four-wheel drive cars containing hand grenades and hundreds of mobile phones.