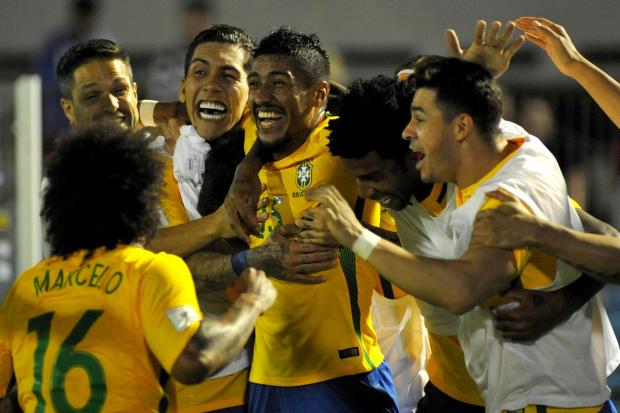 Paulinho hit a hat-trick as Brazil recorded a 4-1 victory over Uruguay in Montevideo to move seven points clear in the CONMEBOL World Cup qualifying standings.

Neymar was also on target with a delightful lob after Edinson Cavani had given Uruguay an early lead from the penalty spot.

It was an eighth straight win for the Selecao under Tite and leaves them on the verge of qualifying for the World Cup in Russia with five games remaining.

Sky sports reports that Neymar posed an early threat to the Uruguay defence and some nifty footwork down the right earned him some room in the third minute, but his dangerous cross evaded everyone in the box.

But it was the hosts who went ahead in the ninth minute from the penalty spot after Cavani was brought down by goalkeeper Alisson.

Cavani picked himself up to take the penalty himself and made no mistake in beating Alisson.

Uruguay then defended with discipline as they denied Brazil time and space on the ball and the visitors struggled to get anything going in attack.

But, as often is the case, Brazil found a way to create something and drew level in the 18th minute when Diego Godin backed off Paulinho, and the former Tottenham midfielder took advantage of the space to burst forward and drive the ball into the top corner from 25 yards.

Neymar was a thorn in the side of the Uruguay defence as the hosts were beginning to allow him far too much space but was trying to do too much himself, allowing Uruguay, and Godin in particular, to clear.

Brazil went ahead five minutes into the second half when Liverpool striker Roberto Firmino turned Godin before seeing Martin Silva save his initial effort, but the Uruguay goalkeeper could not hang on to the ball and Paulinho was quickest to react to poke the ball into the empty net from close range.

Cavani then brought a save from Alisson with a fierce free kick as Uruguay battled to get back into the game with Brazil beginning to sit deeper to protect their lead.

The visitors extended their advantage in the 75th minute with a piece of brilliance from Neymar. The Barcelona striker advanced into the Uruguay box and after he spotted Silva off his line, chipped the ball over his head and into the net.

And Paulinho completed his hat-trick in the last minute to wrap up a comfortable victory and all but secure Brazil’s passage to Russia 2018.