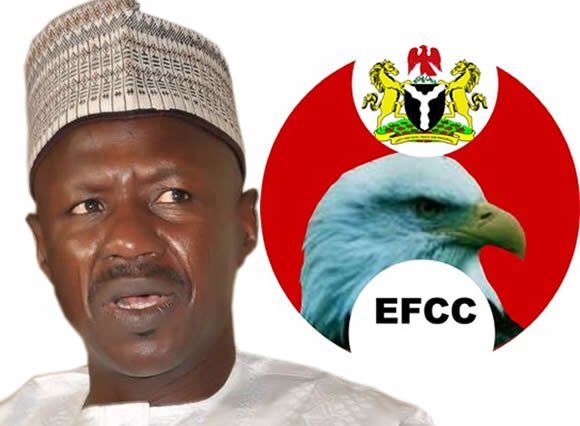 The Department of Security Service (DSS) recently released a seven-page letter which sheds more light on the corruption allegations against Ibrahim Magu, the Acting-Chairman of the Economic and Financial Crimes Commission (EFCC).

The letter appeared to have been written in response to a request by the Attorney General of the Federation and Minister of Justice, Abubakar Malami, which called for documentary evidence of the allegations raised by the DSS in its letters to the Senate, which stalled Magu’s confirmation as substantive head of the anti-graft agency.

No fewer than 12 indicting documents attached as appendixes to the response letter the DSS sent to Malami, through one Folashade Bello acting on behalf of Director-General of DSS, pushed the relentless campaign against Magu’s confirmation miles ahead.

One of the documents contained minutes of the 20th plenary meeting of the Police Service Commission in 2010 which reportedly reprimanded Magu.

The eleven other documents tried to link Magu to Mohammed Umar, a retired air commodore being investigated by the DSS.

The documents were, however, not released alongside the cover letter discreetly circulated Friday but their contents were summarised in the letter.

The letter, which was discreetly circulated to select Nigerian journalists by a group known as Advocacy Justice, appeared to further embarrass Magu and possibly pressure President Muhammadu Buhari to remove him from his post

The letter was undated but marked ‘Classified.’

Below is the content of the letter sent by the DSS the AGF:

RE: REQUEST FOR ADDITIONAL DOCUMENTS/INFORMATION

2. I am directed to forward the attached documents in respect of the report earlier dispatched, by this Service to the Presidency on the Acting Chair,,an of the Economic and Financial Crimes Commission (EFCC), Ibrahim MAGU. They are marked annexures A to L and are highlighted as follows:

i. Annexure A – This is a copy of minutes of the 20th Plenary Meeting of the Police Service Commission on 20th December, 2010, chaired by Mr. Parry B. 0. OSAYANDE (DIG/ Retd) who was then Chairman of the Commission. The minutes indicate that MAGU was indicted after a disciplinary process and awarded Severe Reprimand for “Action prejudicial to state security, Withholding of EFFC files, Sabotage, Unauthorized removal of EFCC files and Acts unbecoming of a Police Officer”. It is worthy to note here that Severe Reprimand is the second highest punishment to be given to an erring officer, other than compulsory retirement or dismissal from Service.

ii. Annexure ‘B’ – This is a copy of the confessional statement of Air Commodore Mohammmed UMAR (Rtd), a suspect hitherto detained and currently being prosecuted by the Service. The statement affirms his ownership of Valcour S.A Nigeria Limited, a company awarded the contract of securing and furnishing an official residence for Ibrahim MAGU by the FCTA. Investigation revealed that this was facilitated after MAGU was earlier shown the residence by one Uche ALEKA, a close business associate of UMAR, who was introduced to MAGU by the former.

iii. Annexure ‘C’ – This is a forged Memo which supposedly originated from the Office of the Vice President and addressed to Mr. President. This was recovered from the private residence of UNAR during a search operation by this Service. The document is a request for approval to commence further investigation into financial activities of Honourable Minister of State for Petroleum Resources, Ibe KACHIKWU. Also attached to the Memo are two (2) genuine investigation reports by EFCC on the Honourable Minister, dated 24th March, 2016 & 13th April, 2016 and duly signed by 1VIAGU. One of the two (2) attachments indicates that the original investigation report earlier was purportedly received in the VP’s office by one Folabo KAY.

iv. Annexure ‘D’ – This is a letter from the Office of the Vice President affirming that Annexure “C” is a forged document.

v. Annexure E – This is a copy of Progress report with reference number SH/ COS/ 24/ A/ 7277 dated 25th May, 2016 on NNPC/ NLG Brass Investment Accounts in Nigerian Commercial Banks from Chief of Staff to Mr. President, Abba KYARI to the Acting EFCC Chairman. The letter is an official/ classified document of the EFCC which was duly received by the Commission as indicated by the stamp on the document. However, it was recovered at UMAR’s residence.

vi. Annexure ‘F’ – These are photocopies of Managers’ cheques of First Bank PLC and Zenith Bank PLC, issued in favour of EFCC Recovery Funds Account on 13/ 05/2016 and 16/65/ 2016, respectively. These are all sensitive official documents of the EFCC found in UMAR’s residence during the search.

vii. Annexure G A classified letter from the Office of the National Security Adviser (ONSA) to the EFCC Chairman titled Re: Request to Freeze Accounts Messers Bebey: Merchant Ltd and 20 others, dated 7th March, 2016. This document was also duly received by EFCC but found in Commodore U1VIAR’s house during the search.

viii. Annexure ‘H’ – A document which emanated from Nigerian National Petroleum Corporation (NNPC) and addressed to the EFCC Chairman on 6th May, 2016 with the subject, Re: Stop Debit Order on all NNPC Accounts and Subsidiaries- A case for Joint Venture & NNPC Pension Funds Accounts. The document was recovered at UMAR’s residence.

ix. Annexure I – NNPC Letter GED/ F86A/ 08.26 dated 5th May, 2016 addressed to the EFCC Chairman and titled Re: Stop Debit Order on all NNPC Accounts and Subsidiaries. This was also discovered during the search of UMAR’s residence.

x. Annexure J – This is a copy of NNPC correspondence with reference number GED/ F86A/ 08.26 dated May 5th, 2016 and titled Re: Stop Debit Order on all NNPC Accounts and Subsidiaries- Transfer of FCT Balances to NNPC’s TSA Accounts, addressed to the EFCC Chairman. The document was found in UMAR’s residence.

xi. Annexure ”K’ – A copy of an NNPC letter with reference number GED/ F&A/ 08.26 dated May 5th, 2016 and titled Re: Stop Debit on all NNPC Accounts and Subsidiaries- Critical Accounts for immediate operations to the EFCC Chairman. The document was also recovered during the search of UMAR’s house.

xii. Annexure L – Copy of Confessional Statement by UMAR to the Service stating that his trip to Maiduguri for condolence visit to Ibrahim MAGU, sequel to the loss of a close relative, was made on behalf of the Presidential Committee on Audit of Arms Purchase. Cross examination of the Chairman of the Committee, AVM John ODE (Rtd) revealed that the committee did not send any of its members on such an assignment. The visit of UMAR to MAGU is therefore assessed as an expression of their close sinister relationship at the detriment of National Security interests.

3. An officer appointed as Ag. Chairman of EFCC should by all means be one of impeccable credentials, with proven integrity and capacity to lead the nation’s fight against graft in high and low places. Thus far, it is evident from MAGU’s antecedents that he is by no means that kind of
officer.

His relationship with Umar MOHAMMED which involved disclosure of very sensitive and classified official documents in his possession shows lack of professionalism and assails his integrity. Moreso, for an officer who was indicted and nearly dismissed six (6) years ago, to again be involved in similar circumstances, it is clear that MAGU is a perennial offender and cannot change.

4. Also worthy of note is the fact that MAGU exhibited a total lack of judgment where it matters most. He accepted to move into a tastily furnished accommodation without any scrutiny of how it was furnished. This is curious and speaks volumes of his personality.

5. The recovery of sensitive and classified documents from the residence of UMAR further underlays his close affinity to MAGU and an apparent penchant for sabotaging official processes and administrative protocols, just to further the latter’s personal material and pecuniary agenda. Such mutually beneficial relationships as with UMAR, who by his confession, approaches ‘clients’ for possible exploitation, favours and associated returns is unprecedented and very damning for an anti-graft top official. It has exposed MAGU as a fraudulent officer and betrays the high confidence reposed in him by Mr. President.

6. A further demonstration of MAGU’s questionable credibility as an untainted anti-corruption official is his failed bid to settle personal scores with one Stanley Inye LAWSON b lacing him on Security Watch Action. It was however discovered that LAWSON was actually working in the interest of the Federal Government and the Action was subsequently expunged.

7. This reinforces the view that MAGU may continue to exploit his official position, if confirmed as EFCC Chairman and indulge in other unprofessional and criminal conducts for personal aggrandizement contrary to his oath of office.

8. Accept the assurances of the high consideration and esteem of the DGSS, please.