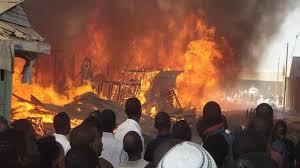 A five-year-old boy has been burnt to death in Benin, Edo state, when their apartment caught in fire.

The victim whose identity could not be ascertained​, was reportedly locked inside a room with his brother by their father when fire engulfed their apartment.

Their father was said to have gone out to buy something when the incident occurred.

It was gathered that neighbours watched helplessly as the victim and his brother cried for help until one of the sympathizers broke through a burglary proof in one of the windows and successfully rescued one of the brothers.

Speaking with journalists on the incident, one of the neighbors who gave his name as Osamudiamen Edobor, said the intensity of the fire prevented help from getting to the deceased.

He said it was shocking for the parents to lock their children in their apartment, only for one of them to die.

“They have stove and generator in that room. The man was cooking in the room. It is sad that one of the children died,” Edobor said.

When contacted, the state police command spokesman, DSP Moses Nkombe, said he was yet briefed on the incident.