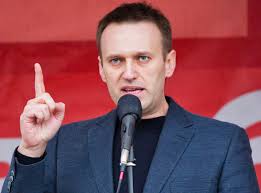 A court on Monday sentenced Russian opposition leader Alexei Navalny to 15 days in prison, saying he had disobeyed a police officer during an anti-government protest in Moscow.

The same court fined Navalny 20,000 roubles (352.20 dollars) earlier on Monday for his role in organising the protest, which the authorities said was illegal.

Police detained hundreds of protesters across Russia on Sunday, including Navalny, after thousands took to the streets to demonstrate against corruption and demand the resignation of Prime Minister Dmitry Medvedev.

Olga Mikhailova, Navalny’s lawyer, told Reuters she had expected such a verdict and would appeal it.

A Reuters reporter saw Navalny being loaded into a van, which was quickly surrounded by supporters holding placards reading” “We believe” and “Alexei, we are with you.”

The Kremlin on Monday rejected calls by the U. S. and the European Union to release detained opposition protesters, accusing organisers of paying teenagers to attend.

The rally, with several thousand participants, was the city’s largest since the protest movements of 2011-13, which were fuelled by contentious elections for President Vladimir Putin, the parliament and the capital city’s mayor.

Navalny, 40, came in second in Moscow’s 2013 mayoral race and has announced intentions to run for president in 2018.

However, a recently upheld conviction on corruption charges could preclude him from the ballot.

His supporters have widely denounced the charges as trumped up.