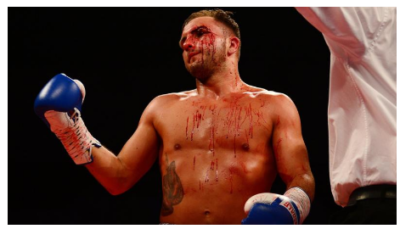 Dale Evans says he could not leave his house and considered quitting boxing after opponent Mike Towell died following their fight in September.

Towell, 25, died in hospital on 30 September, the day after his bout with Welshman Evans in Glasgow.

Almost six months on, Evans has revealed a meeting with Towell’s mother gave him the strength to carry on.

“I did not want to be seen. I did not even feel like going out,” he told Jason Mohammad on BBC Radio Wales.

Evans, 25, has returned to training and hopes to fight again in May, but initially struggled to come to terms with what happened.

He said all he was worried about was Towell’s family, including partner Chloe and son Rocco.

“I was just in the house, in my bedroom, I was struggling to eat,” he said.

“My heart was broken by what happened that night and I cried for days and days.

Towell was knocked down twice by Evans before the referee stopped their fight.

And Evans said a meeting with his opponent’s mother Tracey at the Scot’s funeral was a turning point for him.

“It was frightening,” he said. “I didn’t know what reception I would get.

“I was so glad I went because the reception I got, not only from his family, but friends of Mike and the Scottish people in general was so supportive.

“I came out of the chapel and walked down the steps and a car pulled up and Mike’s mum got out. She gave me a big hug and a kiss and she said: ‘Stop being silly.’

“I admire the strength of that woman.”

Evans was due to fight for the Welsh welterweight title last weekend, but had to pull out with an elbow injury.

He is now hoping to return to the ring in May, and wants to fight for the British title as the mandatory challenger.

Evans wants to win that belt not just for himself, but for Towell too, and his family.

“They asked that when I fight for the British title they can purchase tickets off me and come and support me,” he said.

“I think that is fantastic. Now, when I go to fight, it won’t only be for me, it will be for Mike too.”