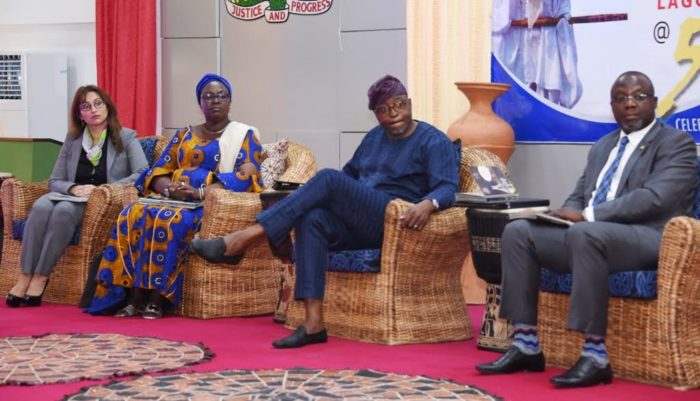 The Lagos @ 50 Planning Committee on Monday unveiled range of activities for the final celebration of the State’s Golden Jubilee anniversary.

Addressing a world press conference at the Banquet Hall in Lagos House, Ikeja, Co-chair of the Lagos @ 50 Planning Committee, Mr Habeeb Fasinro said the final lap of the celebration would kick off on Saturday, April 8 and culminate on Saturday, May 27, 2017.

Fasinro, who was joined at the conference by other members of the Committee including Professor Ademola Abass, Hon. Adebimpe Akinsola, Mrs. Sarah Boulos, Mrs. Chika Balogun, said the events lined up for the celebration has been carefully selected to tell the story and journey from 1967 when the State was created till date.

He said the event would kick off on April 8, with a special Musical Play tagged “Wakaa” produced and directed by ace producer and director, Bolanle Austen-Peters at the Muson Centre, Onikan Lagos.

He said the celebration would continue on April 13 with a three-day Broadway Musical Concert tagged “FELA” that would feature the life and times and the Afrobeat creator, Fela Anikulapo Kuti and celebrate his pioneering music to be performed by a combined cast of the original Broadway production and the Royal National Theatre production under Bill T. Jones.

The Co-chair said a Boat Regatta parade would also hold on April 15 in Epe, Badagry and Lagos Island to showcase the State’s aquatic asset to residents and visitors alike, while a Jazz Meets Fashion event would take place on April 30 and would see Grammy award winning Jazz artistes share the stage with Nigerian musicians while the evolution of fashion in Lagos State over the past 50 years will also dominate the runway.

Fasinro said the celebration would continue on May 1 with a Special Workers’ Day celebration by both active and retired civil servants with a special parade in the morning at the Agege Stadium and a dinner in the evening, adding that on May 5, five of the highest box office films and five evergreen films would be screened to local audience in the five divisions of the State including Ikeja, Badagry, Ikorodu, Lagos Island and Epe.

He said a Lagos Carnival would also hold on May 13 in both the Island and Mainland zones of the State and extend to the different communities and ethnic groups in Lagos, while the Eyo Festival, last staged five years ago, would make a grand return on May 20 at the Tafawa Balewa Square.

He also said on May 24, all former Governors of the State will join Governor Akinwunmi Ambode in council for a Special State Executive Council Session, while the Judiciary and House of Assembly would hold same on May 18 and May 22 respectively.

He said among other events, the grand finale slated for May 27, which coincides with Children’s Day Celebration would feature a historic gala night that would have a rich blend of good music and the best of Lagos cuisine, photo exhibition and the unveiling of a special coffee table book that captures the essence of Lagos through the lens of 50 accomplished photographers.

He said though the 50-day celebration ends on May 27, the celebration of the State’s Golden Jubilee would continue beyond throughout the year with series of festivals and events to celebrate the State’s rich cultural heritage.

Fasinro also enjoined residents to key into the various events, adding that the anniversary is “a celebration of Lagosians, by Lagosians, for Lagosians”.

Earlier, Commissioner for Information and Strategy, Mr. Steve Ayorinde, said May 27, 2016 when the events flagged off, there had been series of events that had held on the 27th of every month to mark Lagos @ 50.