Amnesty: U.S-led airstrikes on Mosul may have broken international law 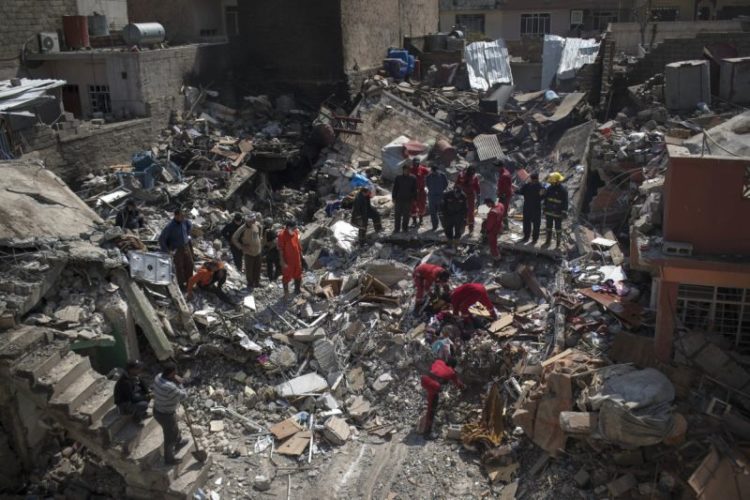 Amnesty International on Tuesday accused the U.S.-led coalition in Iraq of conducting airstrikes in areas of Mosul where it should have known civilian families were trying to keep safe in their homes.

The NGO said hundreds of civilians have been killed in the northern Iraqi city in recent months after local authorities told families to stay in their homes despite the airstrikes, which were aimed at defeating fighters from the Islamic State terrorist organisation.

Donatella Rovera, senior crisis response advisor at Amnesty International said: “evidence gathered on the ground in East Mosul points to an alarming pattern of U.S-led coalition airstrikes which have destroyed whole houses with entire families inside.

“The high civilian toll suggests that coalition forces leading the offensive in Mosul have failed to take adequate precautions to prevent civilian deaths, in flagrant violation of the international humanitarian law.”

In an airstrike on March 17, up to 150 civilians were reportedly killed in the al-Jadida neighbourhood in Mosul.

U.S. and Iraqi authorities announced on the weekend that they were investigating this and other incidents.

Amnesty reported that Wa’ad Ahmad al-Tai, a resident of the al-Zahra neighbourhood of East Mosul, was one of many civilians who followed Iraqi government advice to stay in his home.

“We followed the instructions of the government who told us ‘stay in our homes and avoid displacement,’” he said.

“Residents who had nothing to do with [Islamic State] should stay in their homes … We heard these instructions on the radio. Also, leaflets were dropped by planes. This is why we stayed in our homes.”

As the fighting increased, Wa’ad Ahmad al-Tai and his family sought shelter at a relative’s two-storey home.

“We were all huddled in one room at the back of the house, 18 of us, three families.

“When the house next door was bombed, it collapsed on us, precisely over the room we were sheltering in,” Wa’ad Ahmad al-Tai told Amnesty.

He said six of his relatives were killed including his son and daughter.

On Monday, a United States military spokesman refuted allegations that the U.S.-led coalition had relaxed its rules of engagement on airstrikes against the terror organisation Islamic State in Iraq and Syria.

Efforts were being made to act cautiously, to distinguish between civilian and military targets, according to John Thomas, a spokesman for U.S. Central Command in Tampa.

An official at the city’s civil defence department told dpa on Friday that more than 3,000 civilians had been killed in Mosul since Feb. 19, when U.S.-backed government forces began an offensive to dislodge Islamic State from the western side of the city.