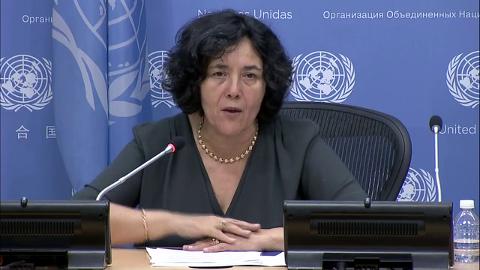 Leila Zerrougui, Special Representative of the Secretary-General for Children and Armed Conflict.

Some children who have been recruited to fight in parts of Sudan are being killed and injured in violence in the country, a new report by the UN Secretary-General has said.

Leila Zerrougui, Special Representative of the Secretary-General for Children and Armed Conflict, also said in the new report that girls had become victims of sexual violence in the conflict.

“Boys and girls continued to be victims of grave violations committed by all parties to the conflict, including killing and maiming, sexual violence and attacks on schools and hospitals,” Zerrougui said.

The report details the impact of the armed conflict on children in Darfur, South Kordofan, Blue Nile and Abyei from March 2011 to December 2016.

It said during that period, nearly 1,300 children were either killed or maimed in conflict as a result of hostilities between the Government and the armed groups.

The majority of the casualties took place in Darfur, according to the report.

“Rape and sexual violence were also a major concern in Darfur, where the UN confirmed at least 372 children were victimised.

“In most cases, children were raped during attacks on their villages or while getting wood or water in the vicinity of camps for displaced people”, the report authors wrote.

In spite of these ongoing atrocities, the report noted a positive trend in recruitment and use of children – with fewer being conscripted.

It, however, expressed concerns about cross-border recruitment and use of children by Sudanese and South Sudanese groups.

The report noted that since 2011, the Sudanese Government has strengthened its national framework to protect children and raised the minimum recruitment age for national forces to 18 years.

In addition, the UN has signed three Action Plans with national authorities to protect children, as well as separately with warring factions.

The Special Representative of the Secretary-General called on the Government and all other parties to the conflict to take concrete measures to protect children.