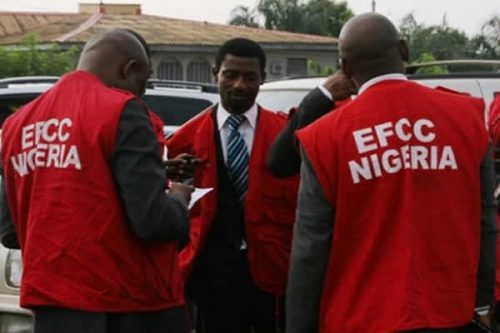 An EFCC witness Daniel Danladi Tuesday told an Ikeja high court that the anti-graft agency did not complete its investigations before charging a senior lawyer to court for corruption.

Danladi stated this while being cross-examined by the defence team of legal practitioner Dr Joseph Nwobike, led by Mr Olawale Akoni.

The judges are Justice Mohammed Yinusa, Justice H.A Ngajiwa and Justice Musa Kurya, all of the Federal High Court, Lagos and Justice James Agbadu-Fishim of the National Industrial Court, Lagos.

The EFCC also alleged that the senior lawyer was in illegal communication via text messages with Mrs Helen Ogunleye, Mr Baruwa, Mr Jide and one Debbie who are all officials of the Federal High Court Lagos.

The defence team while cross-examining Danladi disputed the claims of the EFCC and told the court that the anti-graft agency did not do a thorough investigation into the allegations levelled against Dr Nwobike before charging him to court.

Akoni said: “The case against the defendant was filed in court on March 4, the judges involved in this matter were not interviewed by the commission until months after.

“It is safe to say that the EFCC did not complete it’s investigations before charging the defendant to court,” Akoni said.

“The reason for that delay was that when this case started, we made efforts to invite the judges but they were not able to honour our invitation because of the National Judicial Council (NJC) investigation. But nothing was said about the delay in interviewing Hellen Ogunleye.

“We however, went ahead to file the charges because we believe we have evidence against the defendant,” Danladi said.

The witness admitted that Mrs Helen Ogunleye, a court registrar with Justice Musa Kurya who was not involved in the NJC probe was also interviewed by the anti-graft agency in October 2016, months after the charges against Nwobike were filed.

Danladi revealed to the court that the judges did not admit to the EFCC that the money given to them by Nwobike was to pervert the course of justice but for assistance. In fact, there was no evidence that Dr. Nwobike was having any case before Justice Agbadu -Fishim and Justice Nganjiwa, Danladi told the court.

He said: “All the judges- Justice Agbadu-Fishim, Justice Kurya and Justice Yinusa gave several reasons why the money was paid into their accounts, they did not say that the money was to pervert the course of justice.

“When the commission interviewed Dr Nwobike, he claimed that the N750,000 transferred into Justice Yinusa’s account was meant to assist in the medical treatment of his mother.

“When we confronted Justice Yinusa, he also confirmed that the money was for his mother’s treatment .

“Justice H.A. Ngajiwa admitted receiving N300,000 from the defendant which was paid into his bank account of Hawajiya Ltd, which is his company account.

“The judge admitted that the money was for the purchase of law books for his library.

“Our investigations did not reveal that the defendant had any case before Justice Agbadu-Fishim or Nganjiwa.

“The witness also confirmed that the payments were gifts to Justice Agbadu-Fishim.

“Mrs Helen Ogunleye, a court registrar of Justice Musa Kurya was interviewed by the commission and she admitted to receiving N250,000 from the defendant, claiming that he was rendering financial assistance to her to solve a family problem.

Danladi also admitted under cross-examination that the administration judge in charge of assigning cases at the Federal High Court was not interviewed by the EFCC.

He admitted to not being present when Nwobike’s statement was taken.

“Mr Jide, an official of the Federal High Court told our Commission that he was not the one who assigns cases but the administrative judge.

“We did not investigate the administration judge to factor in the cases involved in this trial and the criteria for assignment of these cases,” the witness told the court.

“The defendant was only interviewed in my presence but I was not present when his statement was taken.

‘His statement was taken by Mr Usman Zakari of the EFCC,” Daniel said.

The detective also admitted that the EFCC did not interview ‘Debbie’ a court regustrar who was allegedly in text message communication with Nwobike.

“I did not interview the said Debbie, I don’t know the nature of the relationship between her and the defendant and l don’t know what the $2,500 given to her by the defendant was to be used for,” Daniel said.

Akoni proceeded to show the court the alleged two text messages between Nwobike and Debbie, where she was thanking her for uncommon favour.

The first text in which she allegedly wrote ‘I have received an envelope containing $2,400.’

The second text was Debbie expressing thanks to the SAN for uncommon favour.

Danladi admitted that not all the over 14,000 text messages contained in the Extraction Report was related to the case.

“Not all the matters contained in the text messages were placed before the judges whose names were mentioned in the messages.”

Danladi also admitted under cross-examination that not all the cases which the anti-graft agency claimed were unduly influenced by the SAN involved the EFCC.

One of such cases is “In AMCON V Mopas Shipping Line Ltd and two others, with suit no. FHC/CS/L/1307/2014 the EFCC was not a party to this case.

”I did not see any communication between the defendant Mr. Jide and Baruwa in regard to this case.

“The EFCC also did not receive any petition from the parties in respect of Justice Yinusa who handled the case.

Justice Raliatu Adebiyi has adjourned the case to May 5 and 18 for continuation of trial.