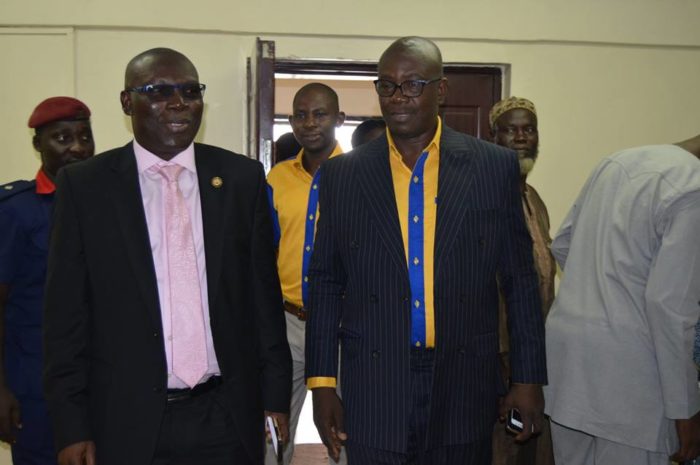 Commissioner for Special Duties and Inter-Governmental Relations, Mr. Seye Oladejo (left) with the General Manager of LASEMA, Mr. Adesina Tiamiyu during the stakeholders' meeting on Tuesday in Alausa, Ikeja.

The Lagos State Government says it is planning to set up a Marine Respond Squad to monitor, rescue and manage any impending disaster in the lagoon in view of rising cases of suicide attempt in the Lagoon.

The government said it was concerned over the increasing rate of suicide committed by frustrated residents in the lagoon and that the situation must be nipped in the bud.

Commissioner for Special Duties, Mr Seye Oladejo, spoke during  a stakeholders’ meeting  with emergency responders and residents in the state held at the Lagos Chamber of Commerce and Industry, LCCI, Alausa, Lagos, Southwest Nigeria on Tuesday.

He said there was need for the stakeholders to have an effective collaboration among Rapid Respond Squad, State Health Environmental Monitoring Unit, SEHMU, Lagos State Waterways Agency, LASWA, FRSC, LASTMA, local divers, fishermen, fisher women,  Vehicle Inspection Service,VIS, and other people who played one role or the other in the management of emergencies in the state.

Oladejo said the meeting would engendered synergy with the stakeholders, saying that most of the disasters recorded in the state were avoidable, if the stakeholders improved on the collaboration already in existence.

“We can’t be careful enough but most of the time you don’t anticipate this emergency, we are even fortunate in this part of the world that we don’t have a whole  lot of natural occurrences. So we need to be careful to bring to the barest minimum the rate  of disaster; road traffic accident can still be managed if road users and drivers are more careful. They should endeavour to call our emergency numbers.

On the  means to tackle the increasing suicide cases and attempt suicide in the lagoon, Oladejo said: “It is beyond having ambulances stationed on the bridges and other places,  we are deploying people who can do immediate rescue on our waterways.

“As government, we are planning to set up a special unit that will be stationed at the  appropriate  place for immediate  rescue of people whenever we have such occurrence but that is not to say that we are encouraging people to jump into the lagoon.”

General Manager, Lagos State Emergency Management Agency, LASEMA, Adesina Tiamiyu said that the agency would continue to do everything possible to prevent, manage and mitigate the effect of the unforeseen emergency situation in the state and appealed to the residents to be safety conscious always.

He disclosed that the 80,000 emergency calls were usually processed and analysed before taking appropriate decision by the relevant agencies, adding that some of the emergency calls include, cases of child abuse, domestic violence, rape and land grabbing cases and other emerging disasters arising from unexpected incidences.

Tiamiyu emphasised the need for increased surveillance on Lagos waterways, adding that Governor Akinwunmi Ambode had approved the establishment of Aquatic Unit for the Agency, specifically for rescue mission on the waterways to complement the efforts of existing responders on Lagos lagoon.

“Presently, we have Lagos Ferry Service, Lagos Waterways Management Agency, the Marine Police, and several others. All of these operatives are always on the waterways daily patrolling the waterways but very soon, what you will see is LASEMA branded boat, also joining forces with those who are on the waterways and this will improve the capacity to respond to any emergency on the waterways,” he said.

The LASEMAboss acknowledged effective collaboration with other emergency management agencies, saying that LASEMA did not, and could not arrogate to itself the power of exclusive knowledge and capacity of responding to all emergencies without the active support of relevant stakeholders.