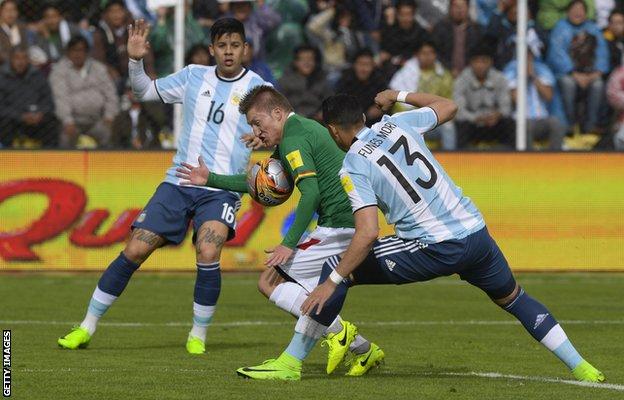 Argentina lost 2-0 to Bolivia in World Cup qualifying, five and a half hours after captain Lionel Messi was given a four-match ban for abusing an official.

Messi was punished for using “insulting words” towards an assistant referee during Thursday’s 1-0 win over Chile.

Juan Carlos Arce and Marcelo Martins scored for Bolivia, while Everton defender Ramiro Funes Mori was taken off on a stretcher for Argentina.

The result left Argentina fourth in their South America group.

BBC reports that with four games remaining of World Cup qualifying, Colombia climbed above Argentina and Uruguay into second as they beat Ecuador 2-0 with goals from James Rodriguez and Juan Cuadrado.

And Argentina could drop out of the top four automatic qualifying spots for Russia 2018 if Chile beat Venezuela on Tuesday night, with Uruguay also in action against Peru and leaders Brazil facing Paraguay.

The team that finishes fifth advances to an inter-confederation play-off featuring one side each from Asia, Concacaf and Oceania.

Funes Mori was taken off with a knee injury just four days after Everton team-mate Seamus Coleman broke his leg playing for the Republic of Ireland.

Messi, meanwhile, will miss games against Brazil, Uruguay and Venezuela later this year.