Your investigation of Sagay’s comments is a travesty’, SERAP tells Senate 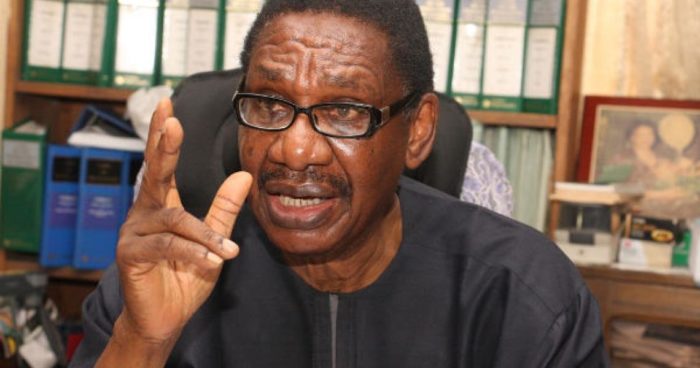 The Socio-Economic Rights and Accountability Project (SERAP) has called on the leadership of the Senate to immediately withdraw the unwarranted and unconstitutional ‘summon’ for Professor Itse Sagay, Chairman Presidential Advisory Committee Against Corruption to appear before the Senate committee on Ethics, Privileges and Public Petitions for reportedly describing the body as ‘childish and irresponsible’ and one ‘filled by people of questionable characters.”

SERAP in a statement on Thursday signed by its executive director Adetokunbo Mumuni said that, “the Senate’s decision to summon Professor Sagay simply for exercising his right to freedom of expression is arbitrary, a travesty, mala-fide, and cannot withstand constitutional scrutiny. Suppression of freedom of expression and public discussion is inimical to peace, order, good governance and the rule of law, and patently inconsistent with the Senate’s law-making and oversight functions.”

The statement read in part: “The Senate is not immune from constitutional control simply because it’s a law-making body. In fact, the Senate has neither special immunity from the operation of the constitution nor special privilege to invade the constitutionally and internationally guaranteed right to freedom of expression of Professor Sagay or other citizens for that matter.”

“The framers of the Constitution of Nigeria 1999 (as amended) would never have contemplated a legislative power without responsibility, and the Senate can’t continue to carry on in a manner that implies its law-making and oversight powers are not open to question. Therefore, its powers under the constitution ought to be exercised reasonably and responsibly, consistent with the fundamental notions of peace, order, good governance and the public interest.”

“The human rights of Nigerians are secured against not only executive lawlessness but also legislative excesses. To trample on citizens’ freedom of expression is to thwart the ideals of representative democracy and the rule of law.”

“The National Assembly is constitutionally empowered to make laws for the peace, order and good governance of Nigeria but recent events in the Senate would seem to stir the public anger. It seems curious that the Senate will be giving a raw deal to the heads of the two leading anti-corruption bodies in the country—Ibrahim Magu of the Economic and Financial Crimes Commission and Itse Sagay of the Presidential Advisory Committee Against Corruption.”

“All public institutions and figures are legitimately subject to criticism and political opposition. The Senate in particular and the National Assembly as a whole would do well to respect the inherent rights of Nigerians that are so fundamental to our constitutional structure. Democracy, constitutional supremacy, and the rule of law require no less. Indeed, no principle is more basic to any proper system of law than the maintenance of the rule of law itself”

It would be recalled that Professor Sagay’s comment was a reaction to the Senate’s refusal to proceed with confirmation of 27 persons President Muhammadu Buhari nominated as Resident Electoral Commissioners. The lawmakers stopped the confirmation in protest against the refusal of the President to sack Ibrahim Magu as acting chairman of the Economic and Financial Crimes Commission despite his repeated rejection by the Senate