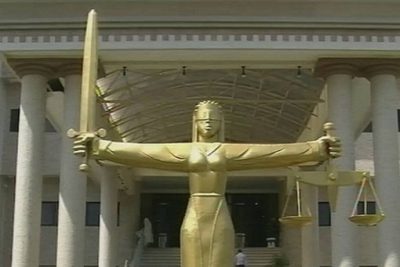 An Owerri Chief Magistrates’ Court on Wednesday remanded in police custody a man, Richard Udeozor, charged with impersonating a lawyer.

The Chief Magistrate, Mrs S.K. Kadurumba, who gave the ruling, said the accused should remain behind bars until the next date of adjournment.

The accused is facing a seven-count charge bordering on impersonation, practising as a lawyer with fake certificates, and being in possession of the Nigerian Bar Association’s stamp and seal.

He is also being charged with presenting a forged qualifying certificate from the Council of Legal Education for attending Law School.

The accused pleaded not guilty.

Police Prosecutor S.N. Onwuchekwa told the court that the accused had committed the offence previously in Anambra, where he was arrested and tried but later jumped bail.

He said the offences contravened Section 467 of the Criminal Code, Laws of Imo.

Earlier, the Chairman, Imo State Branch of the Nigerian Bar Association, Mr Lawrence Nwakaetie, urged the court to remand the accused in police custody as he might escape.

Nwakaetie said the accused had no known relations and stressed the need for his trial, saying “the image of the legal profession is at stake.”

The case has been adjourned until May 10.