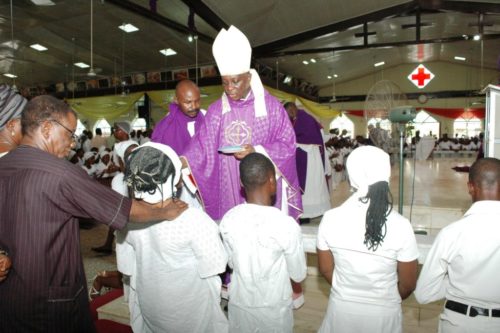 Catholic Archbishop of Lagos; Archbishop Adewale Martins, at the
Confirmation of 780 Youth, and Inauguration of St. Joseph Medical
Centre in Lagos on Sunday (2/4/17)

The Catholic Archbishop of Lagos, Most Rev. Alfred Adewale Martins, on Sunday pleaded with the Presidency and the Senate to consider the interest of the citizenry and resolve the current face-off between them.

Prior to inaugurating the projects worth N77 million, he administered the sacrament of Confirmation on 785 youths from the Ipaja Deanery.

Confirmation, he said, made recipients soldiers of Christ, ever-ready to preach the gospel to any end of the earth and always work in God’s vineyard.

Martins said that the misunderstanding between both arms of government was uncalled for and could distort the growth of the already dwindling economy and the nation at large.

The sour relationship between the two bodies followed the Senators’ demand that the Acting Chairman of the Economic and Financial Crimes Commission, Mr Ibrahim Magu, be sacked and the presidency not meeting that request.

The development has resulted in the legislators suspending for two weeks the screening of 27 nominees for appointment as Resident Electoral Commissioners (RECs) by President Muhammadu Buhari.

Similarly, others called for immediate resolution of the misunderstanding with the fear that it portends danger for the country.

“This is becoming more and more prevalent among us, and therefore, one expects that they will bring all their energies together in order that it will improve on the economy, in order to improve on the welfare of the people.

“So, we just want to continue to ask them not to forget that they have a duty to serve the people given to them by God, because God is the source of all power if they occupy that position today, it’s because God willed it and they are going to give account one day,’’ he said.

“Therefore, they should do it with the best of intentions and with the best of desires, one thing that is important is to say is that whatever the case may be, the common good, the good of the people ought to be the primary factor in the relationship between every arm of government.

“If the senate is doing its work purely for common good not because of some selfish reason, or in retaliation for what it sees another arm of government has done, then whatever he is doing must be good.

“But if it’s in retaliation for whatever another arm of government has done or with not a good clear conscience, then obviously, there is something evil about that.’’

Tags:   The Catholic Archbishop of Lagos   The Presidency