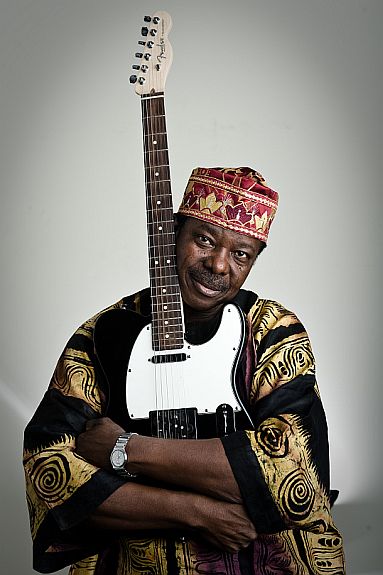 For King Sunny Ade –KSA- the juju music maestro, destiny means more than just another word not even just the title track of his highly successful album in the 1980s. It is an approximation of what the dictionary says it is, the purpose or end to which any person or thing is appointed, unavoidable fate, necessity.

Sunday Anthony Adeniyi Adegeye was born in the then sleepy town of Ondo on 22 September 1946 to parents who simply dreams and prayed that this new ‘bundle of joy’ would follow in the footsteps of the other successful sons of the town, who had made names for themselves in the fields of medicine and law. Little did they know that this infant was an unusual child who was determined to follow only the path destined for him by fate.

He realized quite early that music was his destiny. Against the wishes of his parents, he dropped out in the fourth form in St Charles Grammer School, Osogbo in 1963 to seek fame and glory in his first live – music.

Today, King Sunny Ade not only has a more than brilliant musical career, destiny has thrust upon him the onerous task of leading Nigerian musicians into a new century. He has become not only the king of a particular kind of music but the crowned king of Nigerian music.

As is common with stories of people who have greatly influenced history, the story of King Sunny Ade is one of hard work, far sightedness and determination to succeed even against great odds. He was not born with the proverbial silver spoon in his mouth, but he realized early enough that “if a man says yes, his chi would also say yes.” Today he remains one of the very few Nigerian musicians who have consistently made headlines in the past three decades.

He has not only struggled to get to the top, he has mastered the art of stay there. KSA remains the icon of juju music in Nigeria. according to Benson Idonijie, the respected music critic, he has given more to juju music than anybody else. “Sunny Ade remains not only the King of juju music but also its living monarch,” he says.

Sunny Ade’s first musical tutor was Moses Olaiya (Baba Sala) under whose tutelage he learnt the basic rudiments of music. Other great musicians of the first generation such as King, Julius Araba, Ayinde Bakare, Ojoge Daniel, Ambrose Campbell, Tunde Nightingale and I.K Dairo also influenced his music. Sunny Ade was determined however to extend the frontiers of the music that was basically a traditional art form. He introduced elegance, flamboyance and dignity to live performance as that his music not only competed with highlife which was then the choice music of the elite but was also embraced by non-Yoruba speakers on the international scene. How did he do this? Sunny Ade explains “When I met juju music, the musicians were still sitting down with their instruments arranged in front. I found it hard because I knew people were not getting full value for their money, so I started standing and dancing and also moved the instrument backwards to allow them (the crowd) enjoy their money and I gave my boys a microphone each to dance and sing. As at that time too, they (other musicians) were playing only two guitar. I increased it to three, four, five and the present six.”

The man who was crowned the King of juju in 1977 was not done yet. He dropped the use of the accordion and introduced the keyboard, the manual jazz drum, the pedal steel (Hawaiian guitar) and also increased the percussion aspect of the music. He also added more talking drums, introduced the use of computer and de-emphasise the use of high tone in the vocals.

The journey to the top was however, not all smooth sailing. Two years after leaving Baba Sala, Sunny Ade established his own band, Sunny Adex and His High Society Band. At 19 still within the impressionable age bracket he was soon to change the band’s name to Sunny Ade and His Green Spots Band.

His first release, Alaanu l’Oluwa on African Songs label in 1967 sold only a very disappointing thirteen copies. Undaunted however Sunny Ade went back to the drawing board and the following year he struck gold with Challenge Cup, a hit single in praise of Stationary Stores, the darling football club of Lagosians. This song was a deft move that won the hearts of Lagosians. The 32 year old musician suddenly earned a gold dis and that marked the beginning of a steady rise to the top. His dexterous stage craft and innovations kept him at the top. This was further boosted by his relationship with the late Bolarinwo Abioro, who signed him on to record of his TYC (Take Your Choice) Records. Though the relationship later went sour, Sunny Ade had taken the centre stage. Although he may have experienced a momentary fade out, he was able to bounce back. His greatest strength remains his sense of enterprise and adventure. He has successfully made his music adaptable to the various cultural changes that have taken place over the years. He has refused to remain static, he embraces new perspectives and dimensions of self expression. The result has been greater acceptance especially on the global scene. He is, in fact the first Nigerian musician to be given a high profile launch by a foreign record label, he was signed on in 1982 by Island Records in the United States of America.

Sunny Ade was undoubtedly the biggest name on the nations music scene at the time. He consistently remained on top of the charts. Americans and Europeans simply went crazy over juju music. Fame came and so did good fortune. The romance with Island Records was however short lived because he soon realized that he was pandering more to Western music which meant that his music was losing its distinct indigenous flavor.

Between 1966 and the end of this century, Sunny Ade’s music has gone through different metamorphoses, he began by building on the foundation of such masters as Tunde Nightengale and Victor Olaiya before developing his own distinct style which was characterized by melodic exploration and simple themes that were undisguisedly socially relevant. His greatest strength however comes from his deep cultural roots. He borrows extensively from his rich cultural background. Every release is therefore a compendium of tradional philosophy addressing different aspects of life. From Ekilo F’omode to other hits such Esubiribiri, Synchro System, Ori Mi and later releases – Searching For My Love, Sweet Banana, Let Them Say, Merciful God, Authority and Glory, KSA has remained unassailable.

Apart from his legendary tussle for leadership with Ebenezer Obey Fabiyi, the only other musician who ruffled KSA was Sir Shina Peters. In the early 1990s KSA abandoned what was regarded as his authentic conventional music style for Shina Peters fast tempo rhythm. This proved a misadventure as noted by Idonijie. “The trend started by Sir Shina Peters was not predicated on genuine artistic creativity. It was a childish, unmusical and monotonous tempo beat that tended towards fuji music – rendering the guitar which is the main thrust of juju music totally irrelevant.

King Sunny Ade was honoured in 1986 by UNICEF for his excellent ambassadorship when he played during the Sports Aid activities in New York and before the UN General Assembly Special Session on Africa. In 1994, he launched the King Sunny Ade Foundation, a multimillion naira project sited in Ondo State to include a film village, a recording studio and a gallery among others. His Ariya Nite Club in Jibowu, Lagos is a major hangout for artistes and music lovers while his Sigma Disc Records once held great promise – especially for young artistes looking for a recording outlet.

KSA has also been in the forefront of the fight for the rights of artistes. Apart from being among the facilitators of the Performing Musicians Association of Nigeria (PMAN) he was the immediate oast chairman and director of the Musical Copyright Society of Nigeria (MSCN) he also financed an album The Way Forward which brought different artiste together to make a clarion call. This was a counter poise to the infamous 2 million man march in Abuja in which some musicians participated to entrench military dictatorship.

His other project, that is still spoken of in glowing terms is the duet he recorded with Ms Onyeka Onwenu, Choices and Wait For Me. The two songs advocated family planning. KSA also had a stint with the big screen. In 1991 he starred in Fopomoyo, a film by Express International and Olu Omo produced by Abiola Atanda (Madam Kofo).

The master guitarists life is a veritable lesson in tenacity. He has taken juju music to a level that no one ever thought possible and for over three decades, he has remained its indisputable king and ambassador. What has kept him going is a strong belief in himself. He said when he was leaving Baba Sala, he had the option to come back if he could not carry on but what was on “my mind was to become a successful musician.”

Originally entitled “A king In Tune With His Destiny,” Olayiwola Adeniji contributed this article to People in TheNEWS, 1900-2000, a special publication of this medium in year 2000