After cheating death, Song returns to Cameroon after 6-month of treatment 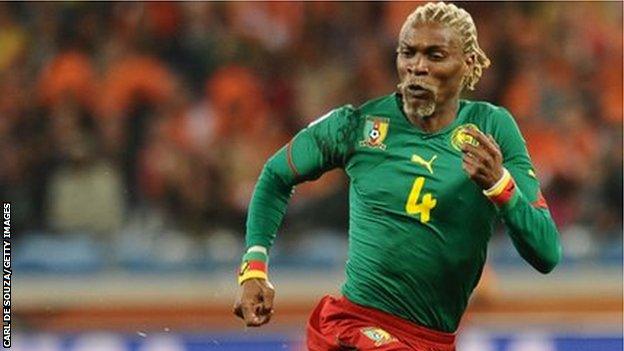 Former Cameroon international Rigobert Song has thanked the country’s fans and President for their support as he arrived back in Cameroon following six months of treatment in a Paris hospital.

The former Liverpool player was taken ill in October 2016 when he suffered a brain aneurysm and was hospitalised in Yaounde where his condition stabilised before he was taken to Paris.

He was reported to have died of the ailment in the media, but he miraculously came back to live.

Song returned to Yaoundé to a rapturous welcome on Saturday where he was met by dignitaries, friends and family.

I don’t remember what happened, but after my situation I’ve seen a lot of things. People have told me what happened. So I’m very happy to come back and I want to say thank you to all the people

“I’m going to say thank you to the people, to God and President Paul Biya and his wife because he did everything to keep me in a good way,” Song told reporters on his arrival at the Yaoundé Nsimalen Airport.

“And people in Cameroon, I’m going to tell them ‘thank you’ for everything they did when I was in my situation.

“To come out of a heart issue without a scar, I am thankful to God and the Cameroonian people. I am healthy thanks to the doctors, I underwent three aneurysm operations,” Song added.

The 40-year-old joked that his return to Cameroon was “not an April fool” and said he could not recall the moment he fell unconscious last October.

“I don’t remember what happened, but after my situation I’ve seen a lot of things. People have told me what happened. So I’m very happy to come back and I want to say thank you to all the people.

“When I opened my eyes the first reflex was to touch my head and I realised something was wrong, I was very far and I thank God for his mercy,” Song told the throng of journalists.

“To be here to celebrate the return of Song, I am overwhelmed with happiness. I joked that he left like a passenger without a ticket, but today he has come back on his feet. I thank Cameroonians and the presidential couple for loving him so much.”

Poueni Francoise, a friend who went to Paris to bring Song back to Cameroon, described how seriously ill the former Indomitable Lion was.

“I was there when Song arrived at Pitie-Salpetriere (in Paris), operations followed immediately and he spent 40 days in a coma.”

Now, although appearing lean and with his famous hair much shorter, Song displayed his usual jovial nature.

He acknowledged the Indomitable Lions’ triumph at the 2017 Africa Cup of Nations and that his reception at the airport reminded him of the special welcome he and his former team-mates received after winning the 2000 and 2002 Nations Cups.

“The Lions came back with the trophy, what again, a retired person?” Song joked.

As for his future plans, Song said he wanted to continue working as a coach for Cameroon’s football federation having undergone a series of tests to determine his fitness.

“I’m going to continue my job. I’m ok now. I don’t have a problem. My problem is in the past now. It’s another situation. I’ll continue to work normally.

“I will start preparing the CHAN (African Nations Championship) set to take place in four months.”