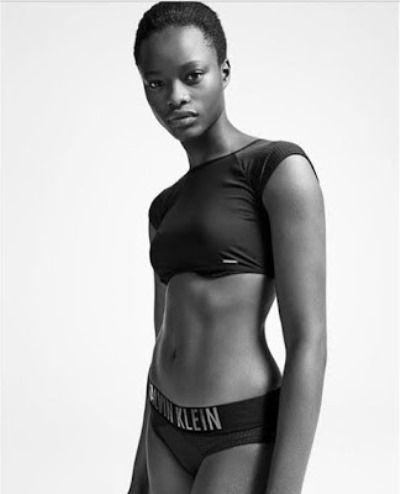 The 2014 winner of  the Elite Model Look Nigeria, Mayowa Nicholas, has been announced as the new of face of Calvin Klein underwear.

The news was shared on Instagram by her Nigerian agent, BETH @bethmodelafrica.

After winning Elite Model Look Nigeria back in 2014, at the age of 14, she signed with Elite Model Management worldwide and for The Society in New York City.

Since her discovery, Nicholas, the oldest of three children born to Nigerian parents in Lagos state, has come a long way.

She became the first Nigerian model to be featured in Dolce & Gabbana’s campaign, appearing in the luxury Italian fashion house’s Fall/Winter 2016 editorial shot in Italy.

Nicholas, who is currently signed to Elite Paris and Milan as well as parent agency BETH in Nigeria was named among the 15 new faces that ruled Fall 2016 by Vogue.

The 5 foot-11-inch model has ripped runways for international designers such as Prada, Miu Miu, Dior and Kenzo and Calvin Klein before this deal.