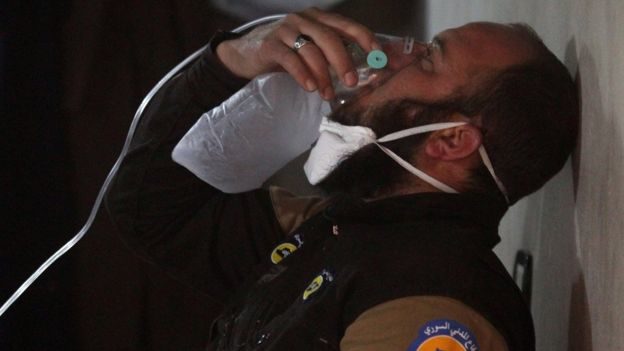 At least 58 people have been killed and dozens wounded in a suspected chemical attack on a rebel held town in Northwestern Syria.

The Syrian Observatory for Human Rights reported that strikes in Khan Sheikhoun by Syrian government or Russian jets had caused many people to choke.

If confirmed, it would be one of the deadliest chemical attacks in Syria since the civil war began six years ago.

Mohammed Rasoul, who is in charge of a charity ambulance service in Idlib, told BBC Arabic that he received news of the air strikes at about 06:45 (03:45 GMT).

When three of his ambulances arrived at the scene about 20 minutes later, medics found people choking in the street, he said.

“Our team is still there, moving patients from one place to another because of overcrowded hospitals.”
“I am speaking to my team and they are doing fine, but the situation over there is very bad and most of those who are suffering are children,” he added.

Mr Rasoul reported that 67 people had died and that 300 were injured, while the pro-opposition Step news agency put the death toll at 100.

The Syrian Observatory cited medical sources in Khan Sheikhoun as reporting that 11 children were among the dead, and that the symptoms among those affected included fainting, vomiting and foaming at the mouth.

The pro-opposition Edlib Media Centre (EMC) posted a large number of photographs of people receiving treatment, as well as images showing what appeared to be the bodies of at least seven children in the back of a pick-up truck. It was not immediately possible to verify the images’ authenticity.

The Syrian Observatory said it was unable to confirm the nature of the substance that was dropped, but the EMC said it was thought to be the nerve agent sarin.

Idlib province, where the air strikes took place, is largely controlled by an alliance of rebel factions and the al-Qaeda-linked jihadist group, Hayat Tahrir al-Sham.

The region is regularly targeted in airstrikes by the government and its ally Russia, as well as the US-led multinational coalition against so-called Islamic State.

The main Syrian opposition alliance, the National Coalition, accused President Bashar al-Assad’s government of being behind the attack on Khan Sheikhoun and called on the UN Security Council to order an immediate investigation. BBC reports.

“Failure to do so will be understood as a message of blessing to the regime for its actions,” it warned in a statement.

In August 2013, the government was accused by Western powers of firing rockets filled with sarin at several rebel-held suburbs of the capital Damascus, killing more than 300 people. Mr Assad denied the charge, but did agree to destroy Syria’s chemical arsenal.

Despite this, the Organisation for the Prohibition of Chemical Weapons has continued to document the use of toxic chemicals in attacks in Syria.

A joint investigation with the UN concluded last October that government forces had used chlorine as a weapon at least three times between 2014 and 2015.

It also found IS militants had used the blister agent sulphur mustard.

Human Rights Watch also accused government helicopters of dropping bombs containing chlorine on rebel-held areas of Aleppo on at least eight occasions between 17 November and 13 December, during the final stages of the battle for the city.